The Official Mormon Church is a bunch of Sissies! 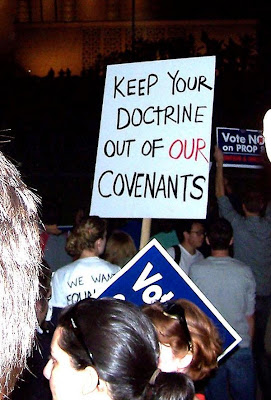 The Mormon church has been hiding behind its membership to avoid taking responsibility for the passage of proposition 8. They say in an official statement:

"It is disturbing that The Church of Jesus Christ of Latter-day Saints is being singled out for speaking up as part of its democratic right in a free election. "

The Mormons provided Just over 50%(updated numerous times--trying to get it right here) of the funds and most of the actual effort to get Prop. 8 passed (also updated). An amazingly well-run campaign. Non-alcolhoic champagne all arround. You should be proud! Why this whine? You did it. Step up to the plate and admit it.

What a bunch of sissies! Grow a pair, boys, (and they're all boys, so it's at least a theoretical possibility). Why this sudden unwillingness to take credit? The sudden realization that the 18,000 people whose marriages you just destroyed might be just a tad upset?

These "latter day saints" need to get current. The times they, uh... have been-a-changin'

A large part of the organization for the support of Prop 8 was Catholic. A large numbr of voters supporting it were black. So here we have 3 groups that all suffered discrimination in the US and now that they are all treated equally and hold positions of power in the country they seek to discriminate and infringe on the rights of other sects.
way to go.....

Good point. Perhaps the american way is, as soon as you've got enough political power, use it to stamp out the person's rights just lower on you on the pecking order. This is exactly what the court system was set up originally to protect us from--the tyranny of the majority.

All advances in civil rights of which I know came from the courts, not from legislation.

Despising the Mormons does not necessitate factual inaccuracy. 80% of the funds? Let's try 37%...yup, that's a better fit.

Honesty should be present, even when we're angry.

I have been trying to find the total percentage of the funds that was Mormon after all the accounting, and will be happy to change my number; if you come back, anonymous, could you post your source?

hmm... someone is afraid of showing their identity