A family church for very small values of family. 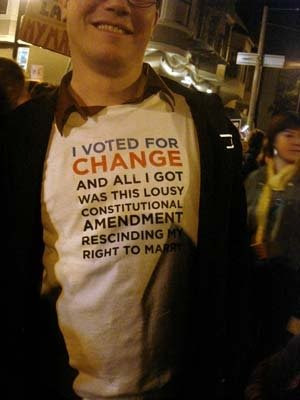 Or, the wrong side of History.

22 some-odd million dollars, out of a total of roughly 35.8 Million dollars for Proposition 8 (that changed the constitution in California to outlaw gay marriage) was contributed by Mormons (2% of the population), plus a bonus 6.7 Million was contributed by Mormons to ensure that partners with the wrong set of genitals can't marry in Arizona, either. In 2004, Prop. 3 in Utah ensured that same sex couples couldn't have any rights AT ALL.

I'm very sorry, my family, and random mormons, I adore you; I have known so many painfully sweet, kind, decent mormons. Then this. The institutional church itself worked very hard to link a "yes" vote--a vote that will disallow the wrong kind of family--with being a moral person. A family church for very small values of family.

(Updated the amounts of money spent)
(Also updated to state that Mormons believe in a strict hierarchy. Their Prophet, Thomas Monson, told them to vote for Prop 8, and donate to Prop. 8. For many Mormons, this is the equivalent to a commandment from God; thost that voted "Yes" could very well have no animus toward Gays at all. This is why I am so pleased to see that Equality Utah is introducing five bills into the new Utah legislative session that would give some legal protections for gay families--the exact set of civil protections the Mormon Church said they didn't mind. Let's see if they pass.)