Marijuana, cancer, prohibition, and you. 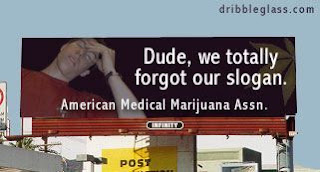 About one out of eight people in prison is there solely for Marijuana offenses, costing the government 9 billion dollars a year. However, marijuana is not addictive--unlike alcohol and cigarettes--is not a gateway drug, and seems to be bizarrely good for you.

What do I mean by that? Compounds in Marijuana protect against lung cancer, and block cancer growth in leukemia, lymphoma and cancers of the breast and skin. Why?

This study discovered that pot use "reduces the invasiveness of cancer cells." Here's a study, from Harvard, that finds that it "cuts lung cancer tumor growth in half and significantly reduces the ability of the cancer to spread." In fact, it seems to be the magic bullet that researchers have been looking for--it looks like it kills the malignant cells without harming healthy cells.

But, the US has not allowed any human trials of this most promising cancer drug, because the war on drugs has trumped the war on cancer. Go Drugs.

A main reason for marijuana prohibition is that it is said to be a gateway to harder drugs. The opposite seems to be the case. A recent comparison of drug use in Amsterdam where Marijuana is legal, and San Francisco, where it is not, showed very similar rates and patterns of marijuana use in both populations; however pot smokers had a much higher use of other, harder, drugs in San Francisco.

So, counterfactually, decrimilization of marijuana would appear to not change marijuana use, but would lead to lower rates of all-around drug use. Not only that, duh, people don't commit crimes, (other then the obvious one) when they smoke up. Perhaps we should pass out joints to violent offenders.

Anyway, the point of this post, which seems to have gotten away from me, is that there were 10 marijuana decriminalization initiatives in the US this election cycle, and 9 of them passed!

Maybe in another twenty years or so, we can start with the cancer cures.
Posted by djinn at 7:39 AM

Why do you think they call it High School? Advice to the class of, uh... whenever. Loose the cigarettes!

djinn, thanks for addressing this. I keep wanting to write a post about it myself, but I worry about who will read it.

I've been using cannabis medicinally for about three years to treat my fibromyalgia. It is the only non-addictive pain reliever I have found that is relatively free of side effects and tolerance. I can't say enough good things about how this herb has improved my life. Before I found cannabis I had days when I could hardly walk. My doctor at the time wanted me on Oxycontin for bad days, prescription naproxen for good days, two different corticosteroids, a low-dose antidepressant and two different sleep aids that were both highly addictive and tolerated. That whole list isn't including what I would have taken to treat the side effects. I would have had to take most of these drugs every day whereas I use cannabis sparingly. With very occasional use of cannabis I have avoided the use of all of these harmful medications. When I got pregnant I was able to immediately stop using the herb with no problem, whereas I would have had to endure very serious withdrawal on such a cocktail as was advised by my doctor.

I will go out of my way to grow this herb myself and provide it to future clients in my work as a naturopath, even if it means that I have to leave the country to do so. You may have given me the courage to speak my piece about this incredibly important medicinal plant.

Oh, Chandelle, I didn't even put up everyting I found, not wanting to bore people silly, but the canniboids (there may be a spelling error there) were discovered to have anti-cancer properties 30 years ago. Got that? The most promising drug for cancer in our lifetime has been ignored because of a stupid stupid stupid stupid fascination with keeping it illegal. I mean cocaine is regularly used in nose surgery. It's not exactly legal for other purposes. What possible purpose is served by keeping Marijuana outside the realm of medicine? Especially as we now know it is, uh, the magic drug we've all been waiting for. Don't those people at the DEA have friends and family that die of cancer? Doesn't it occasionally strike them? To quote Bertie Wooster "The mind boggles."

You should take a look at the Amsterdam/San Francisco paper. It's fascinating. If only to prove that illegailization seems to push drug use up, not down.