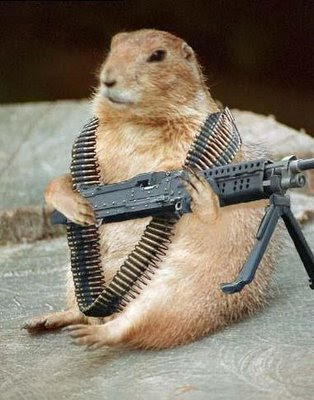 The stimulus bill was attacked by Republicans for having lots of pork and excessive earmarks. One particular complaint came from Congressman Pence.

The stimulus has "$30 million in there to protect mice in San Francisco."
(Mike Pence on Thursday, February 12th, 2009 in a statement on Fox News Channel.)

Senator Boehner's office jumped on the band wagon with this statement,"This sounds like spending projects that have been supported by a certain powerful Democrat in the past. And it certainly doesn't sound like it will create or save American jobs."

A closer look at the actual project tells a different story. According to Angie Drobnic Holan,

But the projects themselves — the South Bay Bay Salt Pond Restoration Project , the Napa Plant Site , and the Napa Salt Marsh restoration — are intended to do more than just benefit wildlife. It's major construction work to create recreation areas and to restore marshland that will resist flooding and storm surge.

"This is bulldozers, front-end loaders, backhoes. These are major earth-moving projects to break down levees, to resculpt the landscape and to make sure nature can do its thing," Ritchie said. "Right now, we just have these lousy little salt pond levees and they break."

"These are real jobs, and these are truly ready to go," he added. "We can definitely spend this money for construction by Nov. 30, 2010."

Given this description of the projects, which were first reported in the San Jose Mercury News , it's a serious distortion to say there's money in the bill to protect San Francisco mice. The bill doesn't even list the San Francisco projects by name. And the funding agencies — the Corps of Engineers or NOAA — could still decide to fund the projects or not. The bill passed a final vote in the House on Feb. 13, with no Republicans supporting it.

So Pelosi did not put an earmark in the bill to save the mice.

I really think there ought to be penalties for politicians who engage in this sort of distortion and outright lying. We can only hope that they will be voted out of office, but how likely is that when stories such as this one get so little coverage?
Posted by kerfuffler at 11:09 AM