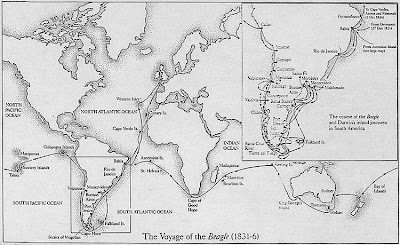 Today Darwin (or at least his bones in Westminister Abbey) turns 200. It is also the 150th anniversary of the publication "The Origin of Species," the book above all others (there might be a bit, but just a bit of hyperbole here) that changed my life.

I grew up Mormon. To save the feelings of family members that might, just might, read this blog, I will not mention the nightmare that this was for me as a child, but basically, I could not get the world to make any sense at all. Here I was, a child, faced with a world controlled by a nightmare of a supreme being (any surprise that I was afraid, among other things, of my closet?)--God has a tissy fit and drowns everyone but a single family? God hardens Pharoh's heart? Then why, if God caused it, is it Pharoh's fault? And what's with Job? That, combined with my father's rather more than dangerous line of work (he was a navigator in the air force, friends of mine regularly disappeared off of the air force bases we lived on when their fathers died) gave me a vision of a world that was a darker place than I could handle.

I was 10ish. And severly depressed; which my parents, due undoubtedly to the time and their own fanaticism, didn't recognize as an illness; rather, I was trouble. An honest assesment for a mormon family, which has a very narrow range of "trouble." In their own defense, I think I read much more fundamentalism into my childhood than actually existed. But, you see , I paid obsessive compulsive razor sharp attention at church ( a feat that has served me well in other aspects of my life, just not this one) and believed that my parents must believe all the wacky stuff I heard over the pulpit. I also didn't trust them enough to ever (ever! My mother died without a heart-to-heart with me) tell them my difficulties, due to the fear I had of being thrown out of the house if I dared express any sort of insufficiently rah-rah-nature to the totally alien world I was born into--I was a coward. I blame myself.

But, my parents had a copy of the "Great Books" in its own bookshelf in the house. This saved my sanity, or quite possibly my life. One of the volumes included both "The Origin of Species" and "The Descent of Man," by the man--Darwin-- himself. I read them. I devoured them.

It was odd, my uber religious family was so pleased that I'd pick up and actually absorb such awkward tomes. Perhaps they were more accepting of my plight than I understood at the time. I'd sleep with the two books and wake up with bruises.

Those two books changed my life. Evolution! The world was beautiful and finally made sense. Monsters there certainly were, but understandable non-omnipotent fickle ones without an odd taste for goat meat smoke and a hankering for smiting.

Thank you Darwin, thank you Mom and Dad.

With all my love to the living and those that have passed on;

By way of contrast, I grew up in a household where I was taught (my dad did not realize this theory was already out of date!) that "ontogeny recapitulates phylogeny," or, that is, that the morphological development of the embryo and fetus reflect the evolutionary history of the species-----hence the presence of 'gills' and a 'tail' before birth. With that as a background, it surely can come as no surprise that when I told my Christian parents that my fiance was Jewish, my dad's first reaction was, " Well, that's a good gene pool!."

My parents may have believed in evolution, but they found other ways to be odd, and make their kids misfits of a sort. I imagine my kids could say the same of my husband and me.

Anyone who isn't at least somewhat of a misfit is too boring to deal with. So sez djinn Plus, I've always loved the phrase "ontogeny recapitulates phylogeny" if only for some wit's rephrase "hagiography recapitulates proctology."

Besides, the O-R-P stuff is sorta half right, kinda, anyway, hints, at least.

Oh, forgot the ORP stuff is kinda sorta right for fetal stages of development only. And then only sorta, etc.

I always found the shrill, self-aggrandizing denunciations of ORP rather pathetic. So what if 'O' merely presents flashes of 'P' instead of a complete 'R'? I honestly don't think the first ORP-ers ever thought that the entire 'P' was represented. (If we watched a stop action movie of a mountain eroding over a million year interval, would we cavil at the lack of inclusion of every seasonal change?) Whoever noticed the ORP phenom deserves a medal----OK, not Nobel worthy perhaps, but still. (Does my fierce defense of the shreds of ORP seem to stem from feelings that my childhood beliefs were under attack? )