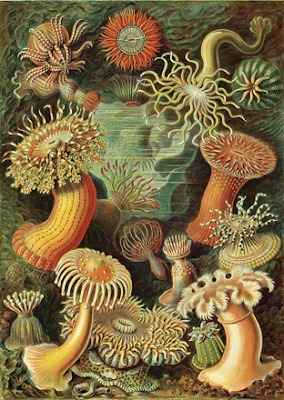 I revealed utter ignorance in a comment thread where I discussed 'ORP', the notion that "ontogeny recapitulates phylogeny"( the idea that embryological and fetal development summarize the evolutionary history of an organism). I goofed when I assumed that the first proponents of such an idea were modest in their claims.

Interestingly enough, French embryologist Serres and his cohort, German anatomist Meckel noticed a link between developmental stages and a "pattern of unification" in the organic world before 1830------before Darwin had come out with his Origin of Species(1859). ( Many scientists of the time already recognized that evolution had occurred; Darwin's main contribution was to identify natural selection as the prime mover in the process.) Serres and Meckel do not appear to have over-claimed anything, and many other scientists of the time embraced their thinking.

Enter Ernst Haeckel who in 1866 proposed the actual 'ORP' phraseology. Haeckel rather misrepresented the relationship suggesting that during development 'adult' forms of ancestral phyla were exhibited. His work included drawings that were over-stylized to enhance his theory, and his idea became associated with Lamarck's ill-fated theory. Because Haeckel was the first to declare "ontogeny re......" the idea was swept into the dustbin even though many reputable scientists continue to believe that Serres was onto something.

Although Haeckel's version of the theory has been discredited, it is interesting to note that as soon as I typed "ontogeny" into the search bar,".....recapitulates phylogeny" was the very first thing to pop up. When I typed in "Darwin", "darwin awards" was the first result. So much for survival of the fittest!

(The pic above is a painting by Haeckel, an accomplished painter-----a useful skill for naturalists. To give Haeckel his props, in addition to the phrase he remains famous for (ORP), he also coined the terms ecology and Darwinism.)
Posted by kerfuffler at 6:49 AM

Such a beautiful summation of stuff I only kinda knew. Plus great art.