This Time Everyone Will Be Watching 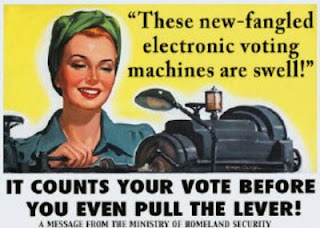 Diebold’s electronic voting machines were used for a 2004 California vote on medical marijuana. The vote results were close enough that the results were challenged. Instead of turning the voting machines over for independent audit, county official sent all the machines back to Diebold. While at Diebold, 96% of the records were mysteriously deleted. In September of 2007 a judge voided the results and ordered a new vote. The judge also ordered the county officials to reimburse those that filed suit.
According to Gregory Luke, one of the attorneys involved,


"Local election officials have been trying to reassure the public that their own oversight will protect the integrity of the ballot.

"Now we see that not only are the machines vulnerable, but some election officials cannot be counted on to protect the vote."

Posted by kerfuffler at 7:06 AM

Email ThisBlogThis!Share to TwitterShare to FacebookShare to Pinterest
Labels: It's good to be a Republican, stupid human tricks

Where'd you get that awesome pic?