Sarah Palin refuses to release medical records: The return of the conspiracy theory 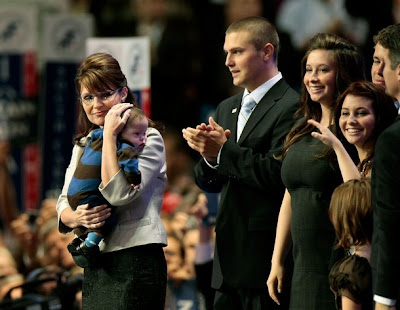 The New York times reports that Sarah Palin, a 44 year old woman, seemingly the best of health, has refused to release her medical records. Why would this be? Is she dying of Cancer? I somehow doubt it; or would it show that she did not actually have Trig, last April, 2008? It would be irresponsible to not speculate. Of course, even more fatal, would be the admission that she had an abortion. Show us your records! Show. Show. Show. Show. Why should we vote for someone that may not be healthy enough to actually serve as VP? Show. Show. Show.

Updated; she hasn't even released a one page letter from her doctor saying that she is healthy; what gives? Is there something really the matter? Or are rules for the little folks with D's next to their names on those important doc's like voter registrations. But sure, even supporters would like to know if she'll be around for the whole term.


Also in this report is the information that John McCain quite possibly had a stage III melanoma 8 years ago rather than the stage II that we've been told. This reduces his chances to surviving his term to around 1/3. Nice.

The Pic of the Palin family is from September, 2008. Bristol is due to give birth in December. Think the baby will be late?
Posted by djinn at 8:43 AM

For what it's worth, Andrew Sullivan shares your suspicions.

Also, when she ran for Mayor of
Wasilla, she forced an opponent to produce a marriage certificate to authenticate his union. She wants all others to show documentation, but she is supposed to be taken at her word.

To Whom It May Concern:

I am David L. Scheiner, a board certified general internist licensed to practice in the State of Illinois. I am on staff at the University of Chicago Hospitals and Rush University Medical Center. I have been Senator Barack Obama’s primary care physician since March 23, 1987. The following is a summary of his medical records for the past 21 years.

During that period of time, Senator Obama has been in excellent health. He has been seen regularly for medical checkups and various minor problems such as upper respiratory infections, skin rashes and minor injuries.

His family history is pertinent for his mother’s death from ovarian cancer and grandfather who died of prostate cancer. His own history included intermittent cigarette smoking. He has quit this practice on several occasions and is currently using Nicorette gum with success.

Senator Obama’s last medical checkup was on January 15, 2007; he had no complaints. He exercised regularly often jogging three miles. His diet was balanced with good intake of roughage and fluids. A complete review of systems was unremarkable. On physical examination, his blood pressure was 90/60 and pulse 60/minute. His build was lean and muscular with no excess body fat. His physical examination was completely normal.

In short, his examination showed him to be in excellent health. Senator Barack Obama is in overall good physical and mental health needed to maintain the resiliency required in the Office of President.

RECORDS LIKE THESE? WHAT A JOKE! NOBODY Questions this? I hope Sarahs are as vague! Let's see what the media says then?

Hello I'd like to congratulate you for such a terrific made forum!
Just thought this is a perfect way to make my first post!

Sincerely,
Robin Toby
if you're ever bored check out my site!
[url=http://www.partyopedia.com/articles/jungle-party-supplies.html]jungle Party Supplies[/url].