Sarah Palin (OK, I have a problem) schadenfreude edition.

Point 1. A new, most certainly negative report on Sarah Palin's attempt to fire her brother-in-law is coming out soon. Sarah Palin, thinking she was oh-so-very clever, decided to investigate her own involvement in the Troopergate investigation. Not bad. However, it looks like an actual prosecutor was hired, and things may not be looking so good for our dear Palinatrix. Newsweek (!) the mainstream media! has the scoop, a portion quoted below.

Some weeks ago, the McCain team devised a plan to have Palin file an ethics complaint against herself with the State Personnel Board, arguing that it alone was capable of conducting a fair, nonpartisan inquiry into whether she fired Monegan because he refused to fire Wooten, who had been involved in a messy custody battle with her sister. Some Democrats ridiculed the move, noting that the personnel board answered to Palin. But the board ended up hiring an aggressive Anchorage trial lawyer, Timothy Petumenos, as an independent counsel. McCain aides were chagrined to discover that Petumenos was a Democrat who had contributed to Palin's 2006 opponent for governor, Tony Knowles. Palin is now scheduled to be questioned next week, and the counsel's report could be released soon after. "We took a gamble when we went to the personnel board," said a McCain aide who asked not to be identified discussing strategy. While the McCain camp still insists Palin "has nothing to hide," it acknowledges a critical finding by Petumenos would be even harder to dismiss.

Point 2. Old-fashioned Alaska corruption with all the usual old-fashioned Alaskan subjects. Sarah Palin and her husband Todd, somehow ended up with a million dollar house that Todd and a couple of buddies were have supposed to have built from scratch in a few months. However.... looks like friends of Ted Stevens (R-about to be indicted for having housing improvements built for him) may have had a hand....
Read the whole story here from the plaid lemur. Love lemurs with style.

Point 3. Almost too ugly to mention, but mention I must. McCain and Palin are making racism acceptable again. Shouts of "Kill Him," "Palling around with Terrorists," etc. Take a look at this pic. Cannot describe. 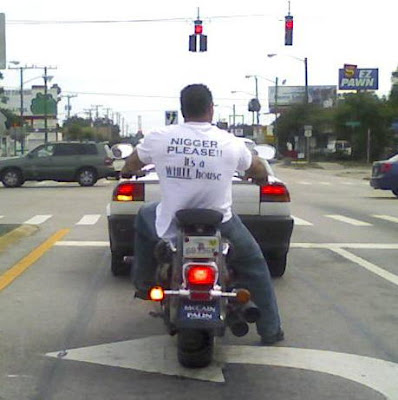 
Point 5. Liar, liar, yet again. I had no idea how easy it is to change the perception of massive numbers of people by simply stating the exact opposite. Sarah Palin says:

The report says the exact opposite:

“For the reasons explained in section IV of the report, I find that Governor Sarah Palin abused her power by violating Alaska Statute 39.52.11(a) of the Alaska Executive Branch Ethics Act.

Thank you, Mudflats (a wonderful Alaskan website), for the quotes.

Point 6. And now, for a bit of levity, what would the White House look like with our dear dear Saracudda in office? Check it out here--palinaspresident.com. Be sure to click everywhere.

ps. The image is Mothra, a scary scary moth. It flies directly to the light, and spends a long time as a larvae. Make your own connections.
Posted by djinn at 6:45 PM

Email ThisBlogThis!Share to TwitterShare to FacebookShare to Pinterest
Labels: It's good to be a Republican, McCain, Sarah Palin, scary monsters

Hey, Lemurs with style, I love it--just for that you get a link from my blog, lol.

And I will return the favor. Gladly. Just keep those entertaining Alaskan politicians coming!

Creepy video. I can't get over that little old lady saying that Obama thinks white people are trash. Where in the world did she come up with that?

It's what I said; random people feel now that racism is a-ok. This is a HUUUGE setback for the good old U S of A. If people feel racist things in their heart of hearts but never say them for fear of backlash, the feelings die out, eventually. But, if they are safe to sa in public, the ideas will spread. I am horrified.

That efforts to stir up racist resistance against Obama have been effective is hardly surprising.

That the efforts to spread the preposterous notion that Obama is a terrorist have been successful is dismaying.