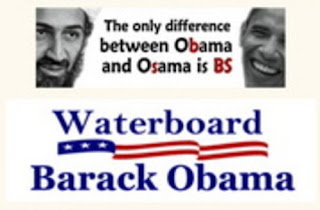 This image came from the official Republican website of Sacramento County, Ca.

This image is not the work of some random extremist that the party can claim they have no control over.

This image makes clear that the attempt to smear Obama as a terrorist, a Muslim, an Arab, and a foreigner is coming from the Republican leadership.

This is not an isolated incident. The head of McCain's campaign in Virginia trained his volunteers to compare Obama to Osama when going door to door. This sort of hateful nonsense has caught the imagination of some followers who have made posters that feature the caption, "Obama Bin Lyin'".

If the conservative movement had an actual plan or message other than hate, wouldn't they be talking about that instead?
Posted by kerfuffler at 4:46 PM

WOW, I am continually amazed by your posts.