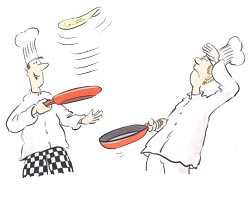 An important witness in Palin's troopergate scandal changed her testimony. Initially she had denied that Sarah and Todd Palin had pressured her to deny a claim for her ex-brother-in-law, Wooten. But faced with perjury charges, Murlene Wilkes now acknowledges the Palins' involvement.

Interestingly, Wilkes held a big contract with the state of Alaska for Worker's compensation. Her bid for this contract was not the lowest received by the State, and Wilkes was under the impression that to keep this contract, she needed to deny Wooten's claim. Wooten's claim was suddenly denied.

Branchflower, the independent investigator, is due to release his report on Oct 10th. The McCain campaign has been doing its best to derail this investigation; last week 3 witnesses ignored their subpoenas, and seven more are expected to this week.

So this is cooperativeness and transparency Palin style. Fortunately, I think we can all see right through their obstructionist tactics-----as long as we're watching.
Posted by kerfuffler at 11:14 AM

I agree, watch and decide. It's a hard game.

Even better news: Todd Palin is testifying, of a sort. I think everyone is reading the polling data and realizing that a McCain administration isn't going to save them. You see, currently McCain's people are essentially running Alaska; what happens when they pull out? Alaskans aren't happy about the outsiders in their midst.

"Another key witness, Todd Palin, the governor’s husband, also is answering a list of questions in writing, and has a deadline of Wednesday to turn them in.

A legislative panel has scheduled a meeting for 9 a.m. Friday to receive Branchflower’s report on Monegan’s firing and whether Palin or members of her administration abused their powers in pushing for the dismissal of a state trooper involved in a child-custody fight with the governor’s sister."