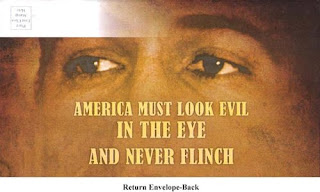 When confronted about tolerating hateful lies about Obama at Republican rallies, McCain made a big show of telling one woman that Obama was a decent family man. That was when people were watching.

But behind the scenes and not on TV cameras (YET?) this is how McCain's campaign conducts itself. This postcard is from the Virginia McCain campaign.

Talk about dishonorable! There is nothing McCain won't stoop to.

Image from Andrew Sullivan's The Daily Dish
Posted by kerfuffler at 8:45 AM