Rationing is what US health insurance companies do best! 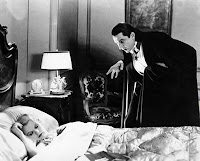 This morning on a local news show I heard yet another health insurance apologist sledge-hammering home the single talking point that the anti-public option vampires (and not the cute kind either) have chosen: the government will be blocking our access whenever we need medical care.

Could such scary unknown governmental 'rationing' possibly be any worse than what happens today? On July 22 a New Jersey hospital, Bayonne, filed suit in federal court detailing the antics of Horizon Blue Cross Blue Shield of New Jersey (BCBSNJ).

What have BCBSNJ been doing? A few tidbits:

--Selling customers higher priced "out-of-network" coverage, and then disallowing out of network claims.

--Making absurd determinations that procedures are not medically necessary and refusing to cover them. In one case (found on page 40 of the complaint) a patient with out-of-network coverage was initially denied emergency coverage at the nearest out-of-network hospital. After they admitted that the patient had purchased such care, they decided that because the patient had once been a nurse, she should have been able to administer IV antibiotics to herself. Care Denied!

--Sending emergency room patients letters (by courier delivered directly to the patient's bedside) telling them that BCBSNJ won't pay for their emergency room coverage, and they must transfer immediately to a BCBSNJ facility on the grounds (determined by mysterious, faceless bureaurocrats) that the care isn't medically necessary, no matter what the attending physician says. The entire complaint can be found here.

Not surprisingly BCBSNJ makes quite a bit of money. This is such a great business plan! Make people pay through the nose for health coverage and then don't give them any. The market value of BCBSNJ is between 7.5 and 8 Billion dollars; they paid their CEO just a hair under 5 Million dollars last year, and they currently have 1.6 Billion dollars in reserves.

BCBSNJ has paid 5 Million dollars to Wall Street to take the company private. Shocking. Not. As a non-profit, they have to at least attempt to pretend they are working for the public good.

Moreover, 21 hospitals have been driven out of business in New Jersey in the last few years, and it appears that BCBSNJ is attempting to kill Bayonne as well. This would be a serious problem for the people of Bayonne, as the next-nearest facility is between 30 minutes (when traffic is light) to over an hour away.

BCBN's 2007 annual financial report can be found here. If you're curious, the company has 20% overhead--contrast with the 3% overhead for Medicare/Medicaid.
Posted by djinn at 4:59 PM

There is a wonderfully savage depiction of the insurance industry mentality in Dooling's great book, White Man's Grave. I can't find my copy (been looking!) so I'll paraphrase. A young college graduate is being taken into the family insurance business, and instructed in the dubious practices of claim denial. When he balks, his older brother "explains" it to him.

'People pay us insurance premiums. We pay out claims. What we don't pay out, we keep. See?'

He follows this with a hilarious diatribe showing just how easy it is to deny a claim.

"So the guy's house burned down. Do we have evidence of neglect?"

"I don't know, I need the file" said the younger brother.

What do you need a file for? Here's a guy who stood back and let his effing house burn down, and you need a file to help you figure out whether or not he neglected it? Well-maintained homes don't burn down, so if this idiot wants us to pay his claim, he is going to have to prove that his house was not negligently maintained. Ask him for a home inspection to prove that the house was well maintained at the time of the fire."

"But the house burned down, there's nothing left to inspect"

"You'll move up fast once you learn not to belabor the obvious......"

Listening to "the man in the street" talk about insurance is amazing. So many people don't understand how it works. Somebody seems to be telling old people that they are going to be euthanized.
I wish we could get this debate out in the open & on a level playing field but the insurance companies know they would lose in a minute so we get all this crazy BS.
Howinthehell a so called christian nation can't think basic health care is a right is beyond me.