Now She's Gone and Done It! 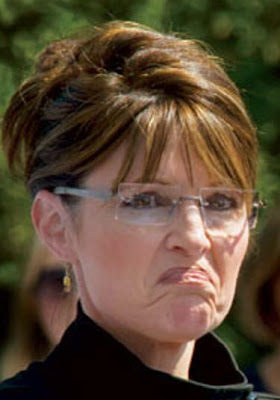 For many months, djinn and I have been avoiding all mention of Sarah Palin even though it would have been fun to laugh at her antics. She was negotiating a book contract, and basically, the more interest in Sarah was shown on the web, the higher her fee would be. We just did not want to add anything to her bottom line.

But now, the contract negotiations are over, so we might as well enjoy ourselves while keeping track of her weaselly political maneuvering.

Naturally enough, the very first thing I ran across was so appalling that I wonder what I have been missing lo these many months.

Check out her new SarahPAC Independence Day message in this video.(Hat tip: Andrew Sullivan) (You'll just need to man up to get past the music, or turn your volume ALL the way off!) Make sure to watch at least until t=1:45

OMG, she has already taken the video down! (Today was it's debut!) I guess you won't have to suffer through the music after all. Can we consider this reaction to her flop a flip-flop? 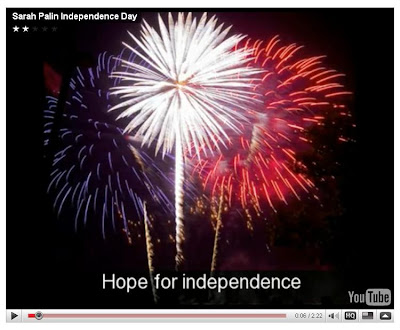 Luckily I have some screen shots I took, because I figured something like this would happen. She starts off with fireworks and features the word 'Independence'. Is this meant as a coded message for the Independence Party of Alaska? Or did they just walk right into that unthinkingly?

She shows lots of pictures of missiles (threats? or foreplay?) and then has a couple of shots of herself in flight suit type gear a la Bush. 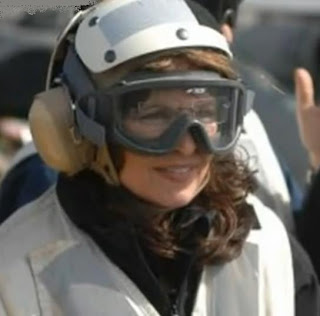 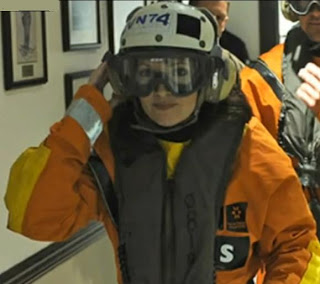 (I feel so safe now at the very thought her her protecting us from those bad, bad missiles ......NOT.)

Then after palling around with men in uniform near fighter jets, she proceeds with a montage of images from that ill advised PR shoot of Air Force 1 buzzing the Manhattan skyline interspersed with pictures of Obama smiling and laughing-----as if he were laughing in real time at the scare he was giving the citizens of NYC.

Obama did not even know about that photo shoot.


But then to top it all off, right after she shows yet another shot of Air Force One over the city, she cuts to this! 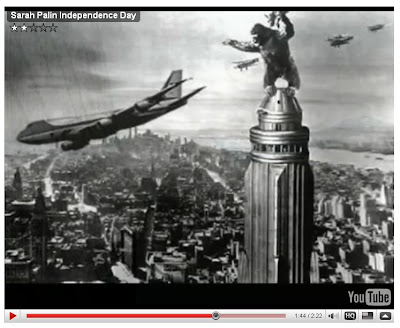 Can You F@cking Believe It?!? She compared Obama to King Kong! How could they not think that that was horribly racist? Who is running her PR? What are they thinking?!? Was that just some red meat that they were throwing to their base? Have they already gotten so much flack over that that they decided to pull the message? 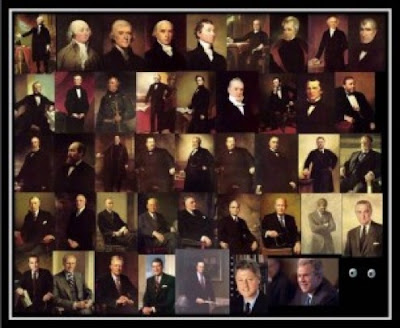 Sarah may have pulled the add within a day, but that can never undo what she did. What do you bet that Republicans will deny that there is anything racist about juxtaposing images of the president with King Kong. Remember how they all denied any racist content in this cartoon? 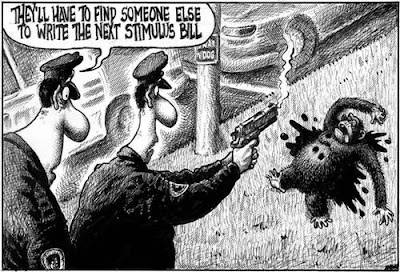 Update: Apparently this video was not official. One of Palin's misguided fans (Laura VW) uploaded it and put the SaraPac logo on it. I wonder if Laura VW has any connection whatsoever to the PAC.

Truly, these people are their own worst enemies.
Posted by kerfuffler at 8:13 AM

I would like to find a copy of this video somewhere. Someone must have it.

I almost 'have' it. I still have the page loaded where I first found it.
As long as I don't reload the page, I can keep it. Maybe I can point my camera at the screen and just copy the whole thing.
If I change the music, would I be able to post it? I wish I knew more about this stuff.

eeek! Uhhhh, what an amazing vid. How to keep?

Yahoo answers suggests:
This is pretty complicated, but it works:
if you use firefox, all of your youtube videos will be stored in a temporary folder.
usually C:\documents and settings\(user name)\local settings\Application Data\Mozilla\Firefox\Profiles\(string of random letters and numbers .default)\cache
before you watch the videos, delete everything but the cache_map and Cache_ files to save confusion. Each video you watch will be stored in this folder, as a random file name. After you watch the videos, they will show up in this folder as large files. Just add .flv to the end of the file name, click edit and move it to whatever folder you want, then use the free flv converter to change it to whatever file format you want. If you want to just leave 'em as the original files, you can watch them with the videolan viewer. It'll play just about anything.
If you use Explorer, it saves the files in a different folder, usually C:\Documents and Settings\(user name)\Local Settings\Temporary Internet Files
It preserves the extensions; just move the files to whatever folder you want.
Either of these browsers does delete all the temporary files on a regular basis, so you need to move whatever you want to keep to another folder. Don't leave anything you're keeping in the temp folders.
If you're going to change the files to other formats, or watch them without adding .flv extensions to the filenames, go to download.com and download a little program called free flv converter 4.8 then
go to sourceforge.net and download another free program called videolan.

Another suggestion is to google "free video converters.

Hi, I'm new here, I was looking exactly for this video. THANKS for saving this!

Now here's the scoop - the person who created this video is a very active Sarah Palin supporter whose name is Laura Van Wormer (I swear, I am not making that up) who lives in Meridian, Connecticut. Now personally I'm not into retribution on a personal level, but I do feel that this person should be "outed" and made to stand by their choice to spread undermining racist images in the name of helping Sarah Palin raise money for her political action committee. Von Wormer knew that this would be just the kind of imagery that would appeal to Palin supporters. If she's proud enough to create it and publish it on a forum where anyone in the world can take in the message, she should be proud to be known for it.

Years ago there was a museum exhibit in Los Angeles called "Degenerate Art" and it showed the art and paintings that Hitler and the Nazi's forbid and labeled "Degenerate", and the art and images that they actively spread on a mass level. The Nazis used EXACTLY this same technique - juxtaposing cartoons and drawings of Jews-As-Apes to spread the idea that they were a lower life form and worthy of being reviled, abused, and of course, eventually murdered.

That is why this type of imagery alarms me so much.

I'll be putting up a link to your site in a couple of places. Thanks again for capturing this.

JUST LIKE A PALIN SUPPORTER EXPOUSING VIOLENCE SHE SHOULD BE MORE THAN OUTED SHE SHOULD HAVE THE SAME DONE TO HER AS SHE TRIED TO DO TO OBAMA.let ALL HER NEIGHBORS AND FRIENDS KNOW JUST WHAT A RACISTS BIGOT SHE IS.HER NAME SHOULD BE PUT IN THE CLOSEST NEWS PAPER

Hmm, don't know about the all caps above or the outrage, but here's a chuckle and a well written post about the SarahPAC video and its creator:

kerfuffler, did you ever end up capturing it?

Unfortunately I was unable to capture it. Darn, darn, darn!!!!

sorry anon above, I do understand being pissed~ and Van Wormer of course is a pen name, but a known one.

Van Wormer is a real name, and is a Team Sarah member. This, from her Member Page regarding the video she created, then changed:

Well, well, well, I posted a donate to Sarahpac video 24 hours ago and within 10 hours there had been 2000 hits and about 100 screaming meme's going crazy and since SarahPAC was on it and I got nervous when one said Sarah was racist... yadayadayada... Anyway, because it had SarahPAC on it I pulled it and snipped it up.

So I threw this up, a minute on Sarah's weekend in Kosovo and flying jets on the SS Stennis and just for fun at the very end had a picture BO looking out his plane asking-- well, you'll see. ANd remember the black reporter with a press pass who was thrown to the ground when she tried to give BO a letter about right to life issues? Well, I put her picture at the end. What does it mean? (shrug) That while Sarah's out with our troops the facism continues (I guess LOL).

Anyway, its been up 11 hours and I've had 4,300 hits from Obamaton sites and so many nasty comments I couldn't count them. I think there are two pro-Sarah ones so it any of you want to post at YouTube, please do. Whatever it is that I've done the anti-Palinites HAVE GONE NUTS which utterly delights me. :)

Reply by James (Missouri) 1 day ago
Love it, Laura. I watch all of your videos. Great job!

Chaz1776 Permalink Reply by Chaz1776 1 day ago
Nice job, Laura....Yes, the fascism continues as Al Franken heads to Washington, BO and Hillary can't communicate about Iran....meanwhile with no fanfare and no regard from this Administration, thousands of young U.S. Marines marched into
the hellholes of Afghanistan today to attack Taliban strongholds.May they be safe and victorious,

Laura Van Wormer Permalink Reply by Laura Van Wormer 2 hours ago
Over 13,000 views today... Did I mention an Obamaton published my name and address on YouTube in response to the video? (Taken care of, but geez.)

I don’t expect applause from this corner as to my motivations for posting this. . .but it angered me that an individual would create such tripe and then falsely attribute SarahPAC to it, and Palin herself by insinuation. Not to mention spreading racism specifically.

Sarah may be many things, but there is no evidence that she is racist or bigoted. She has properly confined her criticisms of Obama to his policies, not the man himself, about whom she has been rather gracious and nominally supportive of in the past.

Skipping over the McCanned 'paling around with terrorists' during the campaign, of course. (Big Skip. . .)