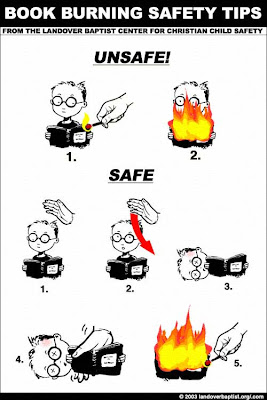 This is the dumbest thing I have heard in a while, and I live in a country with the likes of Coulter and Palin.

In Ireland they have just narrowly passed legislation that makes it illegal to blaspheme. They have defined blasphemy as any statement, written or spoken, that offends a substantial number of adherents of any particular religion. The fine for such behavior is 25,000 euros.

Naturally they have a good reason to want to suppress religious hate speech as they try to put their past behind them. But their writing of the law is so vague that it is completely open to question what sorts of speech-----or books!-----would be considered criminal. Would a book of philosophy that includes essays about the existence or nature of God be criminal? What about a book about evolution? Many Christians find that offensive.

The ironic thing here is that they seem to think that they are protecting religions from blasphemers. But really, all religious claims are in effect blasphemous to other traditions. Can a pastor say that only through accepting the sacrifice of Jesus can one attain salvation without offending Muslims, Hindus or Jews? Can priests say that Protestants are doomed to Hell without committing blasphemy according to this new definition? Can anyone in Ireland object to the practice of stoning adulterers (rape victims?) to death without offending Muslim traditionalists?

According to the new law in Ireland, police can forcibly enter your home and confiscate materials (books?) that have 'offensive' material in them.

I see a book burning coming on. I hope they can tap that energy source for cap-and-trade tax benefits, or nothing good will have come of this.
Posted by kerfuffler at 8:33 AM

I find this truly mind-boggling. My first thought was that this was a hoax. Then my question was "What could they possibly have been thinking?"

Here is a little insight that helps. From an article from May :


The reason behind the proposal would appear to be a small logical difficulty with the Irish Constitution. This contains provisions which state that "the publication or utterance of blasphemous, seditious, or indecent material is an offence which shall be punishable in accordance with law" – but there is no actual law against blasphemy.


What is it they say? "That is an explanation, but not an excuse." Or is it the other way? I can never remember, but I am sure they could have dealt with this inconsistency another way.

Blasphemy? Ireland? I suspect this this is similar to Utah, where 80% of the lawmakers are Mormon, but just a bare majority of the populace are. Translated, there is a bare majority of still-remaining Catholics which vote these (choose unflattering adjective) people into power.