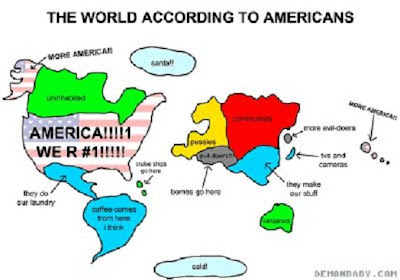 I posted this image a little while back, and asked readers to figure out what the biggest joke was. The trick was to look for what wasn't there as opposed to what was jokingly described. Lots of people didn't seem to notice that Africa, a whole continent, is missing.

A few days later, I came across a piece of "found poetry", entitled The Relevance Of Africa. Found poetry is just what it sounds like, a bit of language, or a part of a speech that someone with a poetic soul recognizes as having vision, power, or in some cases, "fruitful ambiguity". John Lundberg presents us with the startling finds of Julian Gough and Hart Seely.

Julian Gough of the UK's Prospect Magazine opined facetiously this past December that "Palin is a poet, and a fine one at that. What the philistine media take for incoherence is, in fact, the fruitful ambiguity of verse." His example of this "fruitful ambiguity" is a found poem he termed "The Relevance of Africa:"

The Relevance of Africa

And the relevance to me
With that issue,
As we spoke
About Africa and some
Of the countries
There that were
Kind of the people succumbing
To the dictators
And the corruption
Of some collapsed governments
On the
Continent,
The relevance
Was Alaska's.

Whether you consider Palin a poet laureate, or the consummate anti-poet, you must admit she pretty much captured the essence of unthinking American self-centeredness in her comments.
Posted by kerfuffler at 8:05 AM