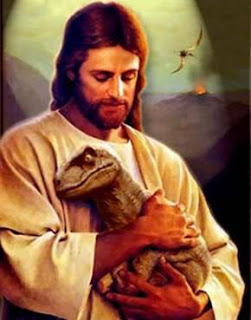 .....10:00am on Friday, August 7, in conjunction with the 2009 SSA Conference, the Secular Student Alliance will be sponsoring PZ Myers to take a one day, in-person tour of the Creation Museum! We've even invited Ken Ham himself to give PZ a tour of the place.

Over a hundred people (scientists and their sympathizers) have signed up to take the tour along with him in Nowheresville, Kentucky, and there are other events planned. It is too late to register, but skeptical people are encouraged to show up and chortle along.
For those of you unfamiliar with PZ Meyers, enjoy this rant from a post of his last year about desecrating communion wafers. (One of many...)

I think if I were truly evil, I would have to demand that all of my acolytes be celibate, but would turn a blind eye to any sexual depravities they might commit. If I wanted to be an evil hypocrite, I'd drape myself in expensive jeweled robes and live in an ornate palace while telling all my followers that poverty is a virtue. If I wanted to commit world-class evil, I'd undermine efforts at family planning by the poor, especially if I could simultaneously enable the spread of deadly diseases. And if I wanted to be so evil that I would commit a devastating crime against the whole of the human race, twisting the minds of children into ignorance and hatred, I would be promoting the indoctrination of religion in children's upbringing, and fomenting hatred against anyone who dared speak out in defiance.

I'm sorry to say that I only aspire to be a teeny-tiny bit evil, and my target is a handful of virtually inedible crackers in my possession. It's not much, and all I can say in my defense is…it's a start. A very small start. I'm going to need lots and lots of people to rise up and follow suit, subjecting old, dishonest institutions of hardened dogma to our chief weapon of ridicule and deris…our two weapons of ridicule, derision and laughter…no, three weapons of ridicule, derision, laughter, and skeptici…oh, never mind. You know what I mean. Get to work.

I don't plan to attend the proceedings in Kentucky, but look forward to reading about the fun.
Posted by kerfuffler at 7:18 AM