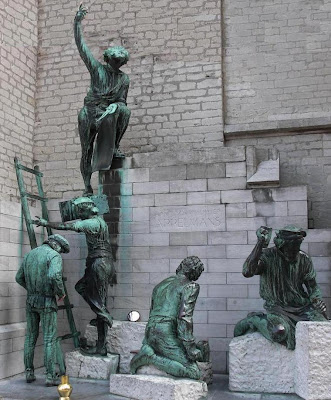 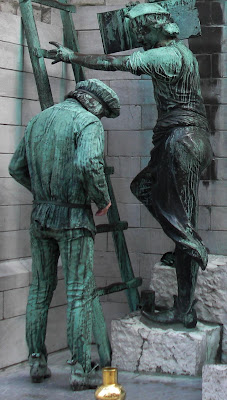 Last year when we were visiting Antwerp, I really liked the sculpture depicting the "ongoing" work of finishing the Cathedral there. When the church was originally built (starting in the late 1400's), they ran out of funds, and one tower remains incomplete. In the 1800's, a sculptor fashioned these figures which stand alongside the church, continuing to "work" on what is now considered a permanently unfinished building.

When I first saw them, it was too late and dark to take pictures, but since it was not far from our hotel, I decided to double back the next morning, and take advantage of better lighting. When I arrived, I saw that a street performer was puttering about amongst the figures, putting on the finishing touches of a costume to make him blend in . 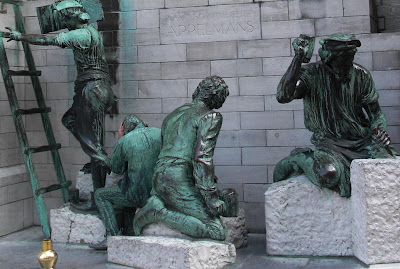 In vain, I struggled to get shots that did not include him. I felt too shy to ask him to get out of the way for a few moments, but now what I like best about these pictures is the fact that he was getting ready. You can also see the mirror (top pic) that he used to apply his make-up, and of course, his tip-jar. 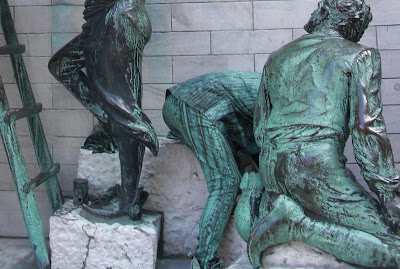 All he needs now are his gloves.
Posted by kerfuffler at 12:02 PM

the sculptures are near the Southern tower of the Cathedral near the main tourist area, the "Grote Markt".