I thought of some things I forgot to mention last year. 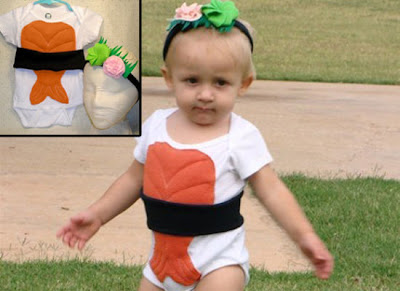 Be inventive! (Like this kid's Mom was.) Sushi costume with wasabi and ginger headband!!!! Brilliant....

Reconsider if your costume just simply makes you look horrible. I was astonished once to see a (single!) friend show up at a party wearing what looked like a tarp with some leaves and twigs glued to it. She said she was a pile of raked leaves. When we introduced her to someone hot, I suspect she wished she could be siphoned up by one of those giant leaf collection trucks. Awkward...

If you are making a costume for a child, make sure it is something that almost everyone recognizes so they don't have to explain it to everyone.

Again, if you are making something for a child, and if there is a head portion of the costume, try and make it detachable especially if they are going to wear it to a party, or to school. 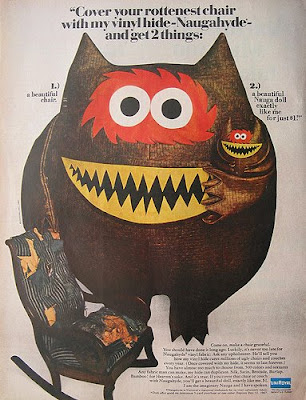 When I was five, my mom made me a costume that broke both those two rules. I was a 'Nauga'! A Nauga was the fictitious creature from which Naugahyde brand vinyl was taken--------according to their ad campaign. Nobody knew what a Nauga was back then either, and it was hard for a five year old to explain.

The worst thing was I wore it to kindergarten. 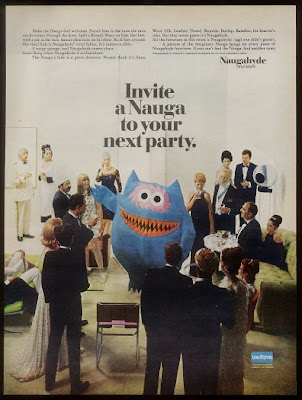 In addition to the fact that there was no way to take off the 'head', she had not made an actual opening for the mouth. She simply appliqued that toothy grimace in felt right onto the face. When it was time for lunch and the Halloween party, I discovered that I could not eat with my costume on! Being very motivated by the treats, I discovered that if I withdrew one arm from its sleeve inside my costume, and brought my hand up to an eye-hole, I could slip jelly beans and the like through the small opening and eat them that way.
Another problem was that I needed help to take it off to go to the bathroom....

Which reminds me, if your young child insists on being a mummy, make sure they go to the bathroom before you wrap them up!

And ladies, remember, it's Halloween, not slutfest! If you want to wear one of these tacky outfits, just keep it in your bedroom and role-play to your heart's content.

If you do buy one anyway, be careful about what is included------in the Warrior Princess one, the shoes are the best part, and yet are not part of the get-up. And the sex kitten costume does not include that bod.

aaaaaaaaaah Halloween childhood memories-I literally spit/laughed some coffee out at the idea of feeding yourself jelly beans through the costume eyehole LOL..I don't get the sexy Halloween costumes and never did - Halloween (All Saints, Day of the Dead, etc) is about spirits, ghosts and ghouls..though some of the "Sexy" costumes I have seen have scared...

Do the implants come with the costumes too? ;-)

I laughed out loud at your kindergarten costume eye ball munching story. I need to stop by more often!

Nice to hear from you, Steve! The new family is keeping you pretty busy, huh? Happy Halloween!

Got a costume planned for the little one?