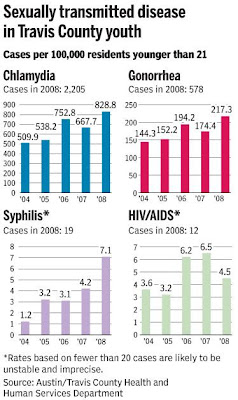 After years of embracing and championing a "Don't Ask, Don't Tell" policy of sex-ed-------otherwise referred to as "abstinence only sex ed", Texans have been forced to acknowledge that the program has been a terrible failure. According to Brenda Bell of the American Statesman (the Austin Newspaper):

More government money has been spent on the cause of sexual abstinence in Texas than any other state, but it still has the third-highest teen birth rate in the country and the highest percentage of teen mothers giving birth more than once.

The rate of student pregnancies in Austin high schools has increased 57 percent since the 2005-06 school year, and rates of sexually transmitted diseases are rising among Travis County teens.

STD rates are rising dramatically as well, leading Texas politicians to devise new plans to educate their state's teenagers regarding health and sexuality.
Posted by kerfuffler at 9:57 AM

Email ThisBlogThis!Share to TwitterShare to FacebookShare to Pinterest
Labels: get a clue, sex, very sad things

Great. Just yesterday or today our lovely democratic congress just authorized more abstinence only education. It's the perfect policy for social conservatives--they get to feel all smug for doing the "right" thing, while making the problem worse, which requires more "intervention" on their part and so on.

but the believers will just claim hat they are not trying hard enough and the media is the fault...you expect them to understand numbers?