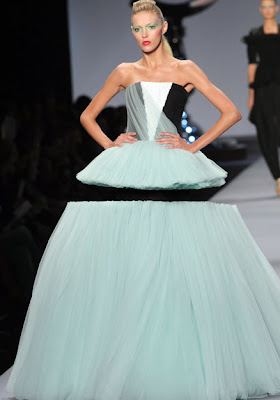 I suppose I should not be surprised. After all, ridiculous haute couture clothing has been around for a long time. But this collection is staggeringly awful, and leaves me wondering, "someone got paid for this?""
I will make one exception and note that with the right lighting and background, this outfit achieves a fun "woman-sawed-in-half" effect, so it might work for a Halloween party. 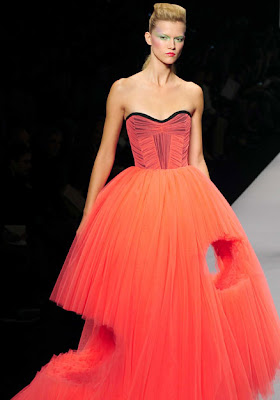 And I suppose there is some enjoyment to be had from the orange gown that appears to have suffered extensive damage from tunneling rodents------a good laugh, that is.


But really, what the Hell are these designers thinking? Do they actually think some woman wants to venture forth looking like a flounced pillow sham? 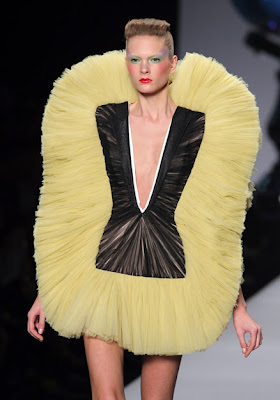 I don't even know where to start enumerating the deficiencies of the lavender outfit, except that I have heard that last year's Elizabethan collars are Way Out now------of course I thought they went out of style over four hundred years ago, but I suppose fashion is cyclical.

Mostly it just seems like they cannot even conceive of a woman coming across as attractive. 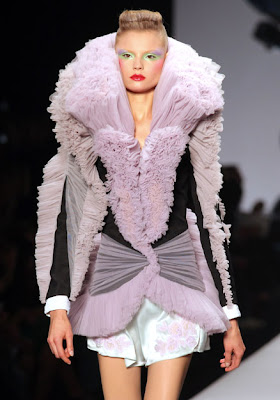 In fairness, it must be said that the designers don't know how to make themselves look good either. The cuffed, too-short, plaid pants, the ill fitting jacket (on the guy on the left) the patterned lapels that clash with his tie, a too formal black jacket with jeans (sport jackets can go with jeans, but this looks more like a suit jacket), and a possible dress-shoes-without-socks violation again on the left all suggest that they are fashion poseurs without originality or vision who feel the need to be merely outrageous (in the currently accepted ways, of course) to establish their cred. But at least they look better than the woman on the right in her pink shoulder tutu! 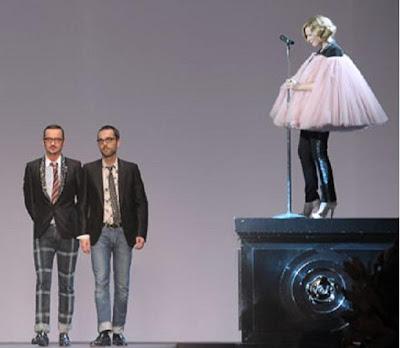 Posted by kerfuffler at 7:19 AM

Email ThisBlogThis!Share to TwitterShare to FacebookShare to Pinterest
Labels: clothing, fun, get a clue, Why don't we have a stupid tag?

Tee hee!!!! that outfit in the middle looks more like a dust mop gone bad.

Swiffer! That was the product I was trying desperately to remember.