The Bear Of Peace 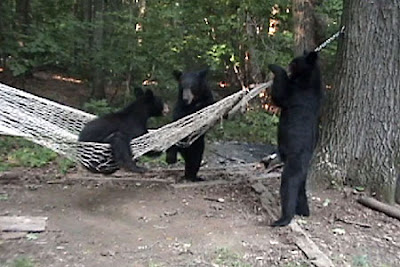 Fifteen years ago, the Nobel Prize for Peace was shared by three recipients, Arafat, Peres and Rabin, prompting an Israeli citizen ( I imagine with a very heavy Russian accent) to comment, "The bear of peace has not yet been caught, but already they are making coats from its fur." (I could not find the quote-----it's too old but not famous enough.)

I have always wondered where the phrase "bear of peace" came from, and what it meant. I can find nothing on the internet other than New Age Bears with peace pipes.....

My best guess is that it refers (like the 'bear market') to the famous skittishness of bears-----the way they disappear into the menacing forest when they hear humans puttering nearby. Just like peace!!! Peace does not just fly down from above and perch coyly on one's shoulder like a dove. It must be pursued into dangerous territory, and is remarkably elusive.

Anyway, today many are shaking their heads that Obama has been awarded the Nobel Prize for Peace with something rather short of a lifetime of achievement in this field. He has stated good intentions-----nuclear disarmament, a commitment to peaceful negotiation and global co-operation on climate change------but has as yet to achieve any of these goals. Like Arafat, Peres and Rabin, Obama has been awarded a prize in anticipation of good works. We all saw how well that worked last time. Perhaps this time will be better.

Frankly, the award reveals the degree of the world's (Sweden's?) desperation for the US to join other countries in confronting the dangers facing us all. After eight years of Bush, awarding such a prize to our new president seems like a way of rewarding the American citizenry for having done a better job voting.

Makes more sense than assuming it was an affirmative action pick.
Posted by kerfuffler at 8:28 AM

if you look close you will notice that these are men in bear suits.

How can you tell? I agree that the posture of the upright bear does look rather human, but bears do stand upright after all.