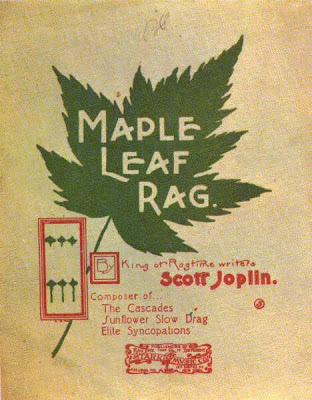 The Maple Leaf Rag was written in 1899, and was the first piece of sheet music to sell over a million copies.

I remember my grandmother telling me about how my grandfather would play the Maple Leaf Rag to impress her back when he was wooing her. She still had the sheet music, yellow, brittle and flaking around the edges. She gave it to us when my sister and I started taking piano lessons, and my sister has it to this day. It looks exactly like this edition. (I love the access that we have to cherished memories through the divine intervention of the internet.)

I learned the first two strains, but never the third which is harder. Looking around on You-Tube, there were a lot of versions, but I kind of liked this one. He plays it "shuffle style" rather than straight which many musicians argue about tediously, and he improvises and embellishes frequently which would probably enrage yet more scholars. But I really enjoy his version more than just about any of the others. (Sometimes a potentially good version is ruined by poor recording quality.) Often it is simply played way too fast.

The piano he used also sounds perfect for this. Enjoy!

Posted by kerfuffler at 8:57 AM

Email ThisBlogThis!Share to TwitterShare to FacebookShare to Pinterest
Labels: Music

I love Scott Joplin, and have sinve forever.

I am old enough that I remember when "The Sting" came out; a quick google shows that "Maple Leaf Rag" was not included in the soundtrack, but I remember being infuriated (and still am) that Marvin Hamlisch won the Oscar for best score by just (essentialy) playing Scott Joplin.

"since forever," it turnso out.

I grew up with some cheesy, commercial recordings of ragtime music (Reader's Digest!)but we had had them before 'The Sting' came out, and I remember feeling rather proprietary about the music. Silly, but there it is.

I still have those records....it would be funny to upload those gimmicky tracks-----you know, lots of slide whistles, whizzbangers and pop-doodles. (I clearly don't know the real names for a lot of the noisemakers in the rhythm section.)

How old would the music need to be for that not to be an infringement?

Copyright law is waaay confusing. Really old. That's how old it'll have to be. Specifically older than Mickey Mouse.

But Reader's Digest music from the '60's or early '70's? The worst anyone could do is ask me to take it down, right?

My oldest just did her music report on Scott Joplin! Thanks for posting this. Fantastic!