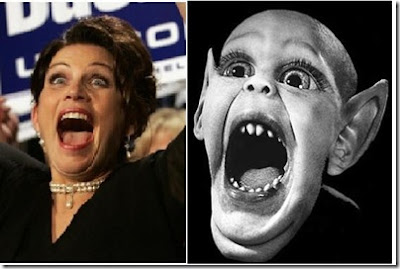 Earlier this year, Michele Bachmann (Republican rep. from Minnesota) announced her intention to refuse to answer census questions, fueling paranoia about the census amongst the wingnut conservative faction. Bachmann's mischief has now apparently resulted in the death of a census worker. A 51 year old census worker's body was found hanging from a tree in Kentucky, and investigators have ruled it a homicide.

Although the investigation is ongoing, because the victim of the hanging had the the letters FED scrawled on his chest, the FBI is concerned that the killing was politically motivated, and census workers in the county where this took place have temporarily suspended door to door interviews.

There have been too many threats of violence from this faction of the Republican party, and if the Republican leadership wants to demonstrate any patriotism whatsoever, they need to repudiate this senseless killing and anti-government bile.

Fear of the census is only one of Bachmann's paranoid delusions.
Posted by kerfuffler at 11:57 AM