The largest oil field in Mexico, Cantarell Field--the eight largest oil field in the world--has gone from over 2000 kb/day in 2004 to 588 kb/day as of July of this year. The production has crashed. Looks like the well will be dry by the end of next year. Why this is important is that Cantarell went from peak production to almost depleted in only five years. Help! For even more doom and gloom, 6 of the largest 18 oil fields are in Iran and Iraq; I seem to recall we've not been ingratiating ourselves to either of these countries lately. 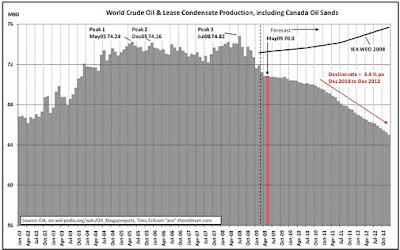 For fun, above is a chart of historical and projected oil production, found here.
More from the above link: