She was into S&M and Bible Studies* 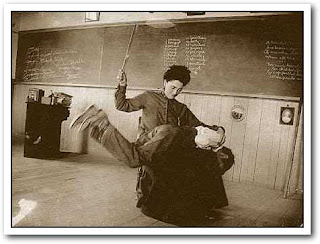 Why? The authors suggest that spanking may cause post-traumatic stress syndrome that makes learning more difficult.

Spanking leads to other problems, such as sexual dysfunction, general aggressiveness,

What's a parent to do?

Unlike spanking, however, verbal punishment alone didn't affect either children's aggression or their cognitive development. But interestingly, when verbal punishment was accompanied by emotional support from moms, the children did better on the tests of cognitive ability.

My mother stopped spanking when she came to the realization that "you can't teach a child not to hit by hitting them."
* Win a prize if you get the reference.
Posted by djinn at 11:37 AM

Email ThisBlogThis!Share to TwitterShare to FacebookShare to Pinterest
Labels: random