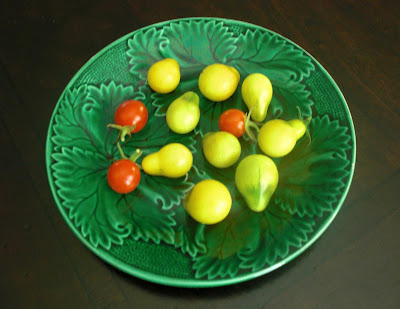 This Summer I wanted to have lots of Brandywine tomatoes, an heirloom variety with few seeds and lots of flavor. They tend to be irregularly shaped and are prone to splitting, and hence rotting. The ones at the grocery store always seemed overripe as did the ones at the farmer's market. I decided I would grow my own. 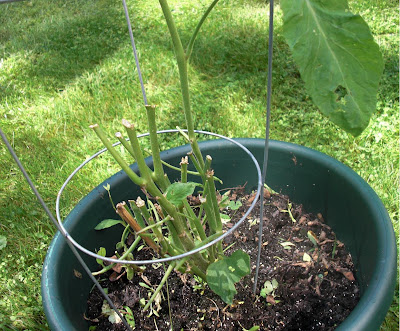 For a while everything grew really well, and then the deer discovered them. I had not sprayed the plants with anything because I did not want that putrid stuff on our tomatoes. I thought perhaps that I had them close enough to the house and that, furthermore, tomato leaves are supposed to be poisonous, so maybe the deer would not be fans.


The deer ripped one plant completely out of the soil, and bit several of the others back severely. I moved the least damaged ones to different spots on the deck where I hoped they would be safe although they would get a lot less light. The deer even pursued them onto our deck! Fortunately we have an upper level on our deck ( with even less sunlight) and although it is a little crowded with our table and chairs, I made room for the least ravaged of the plants.

The plants took a long time to recover from the setbacks and are just now beginning to offer a few fruits. It appears that I will harvest a grand total of two Brandywine tomatoes, and a few handfuls of cherry tomatoes. What you see in the picture at the top is my largest haul so far. I picked about seven cherry tomatoes five days ago. At least it looks like there are a few more on the way. And of course I am waiting for those two Brandywines to ripen. 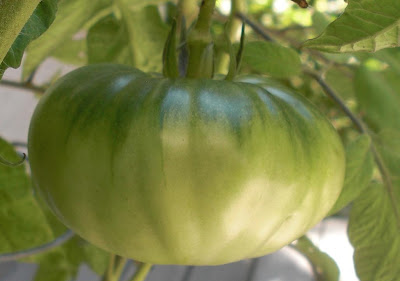 It reminds me of the old joke about the two fishing buddies. After a disappointing haul of only one fish on their vacation, they tally up their expenses, cabin rental, boat rental, fishing tackle and bait only to discover that the one fish they caught cost 14 hundred dollars. "It's a good thing we didn't catch anymore!"
Posted by kerfuffler at 10:00 AM

Ha, reminds me of our tomatoes this summer, but we don't have deer to blame! :)