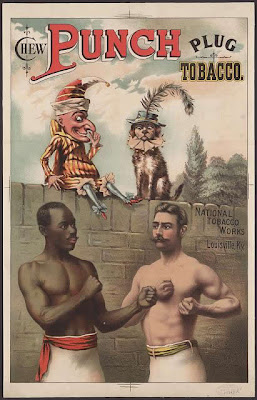 I confess to feeling a bit of sympathy for Rep. Lynn Jenkins (R-Kan.). She is currently being excoriated for her use of the phrase, "great, white hope." She claims to have been unaware of its origins and racial connotations.

For anyone who does not know, the expression comes from a situation in 1908 when a black boxer, Jack Johnson, had won the world championship match, and whites were eager to find a suitable white contender to take back the title.

I feel sympathy because I too once ignorantly used that phrase. I guess I had heard those words strung together before, possibly by someone else who had no idea-----after all, how many young people are aware of boxing trivia from the early 1900's? I assumed that the word 'white' in the phrase was meant to connote a shining purity, the bright gleamingness of the goal or hope ( like a beacon of hope). It simply never occurred to me that it was racist in origin. Just as when we refer to the "Black Death", or "our darkest hour" we don't stop to think whether or not black or dark have anything to do with racial politics. (They don't.)

I was lucky that I did not offend anybody, but I will certainly never use that expression again. I will also call spades shovels rather than spades even though that expression comes to us from ancient Greek literature, almost 2,500 years before anyone used the term 'spade' to refer to an African-American.

Jenkins has apologized and claimed ignorance. We should all give her the benefit of the doubt on this issue. Anyone who really wants to attack her character can surely find much better fodder than this.
Posted by kerfuffler at 9:43 AM

Email ThisBlogThis!Share to TwitterShare to FacebookShare to Pinterest
Labels: Grammar

I'd never heard of this first use, fascinating. However, there's long and storied (not to mention sordid) use of this phrase to mean exactly what it sounds like. I dimly remember.... However, teh great google is totally awash in the latest mouth-foot blunder. But, but, but, it's usage extended at least into 1970, when James Earl Jones starred in a movie of the same name. And, since VHS/DVD/Blu-Ray, such movies live forever.

What do you mean no excuses? Am I not excused? Fortunately the context in which I ignorantly used the expression was not even remotely open to interpreting it as a racist comment-----just a bizarre nonsequitur (sp?) to anyone to knew what it really means. And because I have made that mistake, I have to believe that others are capable of the same folly. She really may not have known!

I suspect that if you heard racists use the phrase you would very quickly divine it's meaning. But if you were to hear other innocent fools use it innocently, you would not have a chance at correctly inferring it's original intent.

One word: niggardly. Turns out it's Scandinavian. I still don't say it in public.