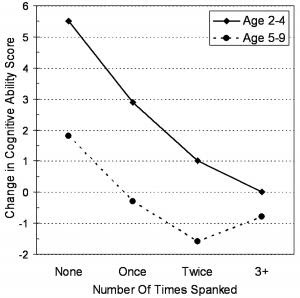 This is really just a comment that was too long so I decided that it would make a better post.

The article that djinn cites includes the graph on the left. Notice that the bottom axis of the graph is labeled "number of times spanked". They include once, twice, or 3+ as studied categories, but they do not specify over what time period they are referring. Is it once a week, once a year, or once ever?

The text of the article suggests that they are referring to weekly occurrences.

Frankly, I find the omission of the time period from the graph very suspect. It makes the author appear willing to mislead the readers because he, himself, disapproves of spanking. The article maintains:

IQs of children ages 2 to 4 who were not spanked were 5 points higher four years later than the IQs of those who were spanked.

Looking at the graph, this statement is not even true. Four years later, the young children (age 2-4) who were not spanked had IQs 5 points higher than only the very most spanked category. (3+ per week, or more than 150 time per year! Anyone spanking their child that often must be an idiot, so no wonder their kids don't fair well on IQ tests. ) The difference between the unspanked and the rarely spanked (once a week) was more like two points. And frankly, if "rarely" spanked is 52 times a year, that is not very rare.

They did not even include a category, it would seem, for parents who truly only use an occasional moderate swat-----about a handful of times over the course of the early years. Furthermore, the steeply sloping curve on the graph creates the false impression (at first glance for the inexperienced graph reader) that IQs plunge significantly if you spank your child once or twice or three times ever. How many people understand what the zero level in this graph means for the 'thrice spanked'? I think it is wrong to scare parents about rare swats with misleading graphs and studies.


I am completely against spanking by which I mean the highly ritualized punishment ("Just wait till your father gets home!") used with children lain, for example, across parent's laps for a specified number of blows or lashings (in the olden days with pants down! No wonder the sexual dysfunction.... ) in punishment for badness (messy room, sassing, poor grades, fibbing, meanness....). And I am against all slaps or blows dealt in anger.

But sometimes with toddlers who are too young to understand explanations of danger, and who will not desist from dashing into the parking lot (or street, swimming pool area.....) a parent needs a way to communicate that they are not kidding. Many toddlers love being chased, and when they notice that parents always chase them if they head towards parking lots, they think they know how to force a fun game. When stern words have failed to work, caregivers need a way to communicate right then that the parking lot is OFF LIMITS. A rebuking tone accompanied by a theatrical 'firm tap' and then pointing at the forbidden zone may be the most effective way of communicating this idea to a toddler with very limited language.

This kind of lesson may need to be given several times in one day, or over a period of a week while the child checks out the new limit. But parents will not find that this translates into a regular campaign of spanking that needs to be maintained for years. The behavior should disappear very quickly, especially if swatting has been reserved exclusively for dangerous conditions. And as the child grows older and develops more language and the concepts necessary for understanding danger, the explanations about why parking lots are dangerous should be repeated.

Even if such rare, mild swats lowered IQ scores by two points, I suspect that most parents would rather have a slightly dumber child than a dead one.

By and large, I agree with djinn's mother that spanking is not well suited to teaching children not to hit.

My mother stopped spanking when she came to the realization that "you can't teach a child not to hit by hitting them."

But I did once have a situation where I needed to teach a toddler not to bite other children. I was a home daycare provider, and one of the six toddlers I was watching over started to bite other children out of aggression. I had an obligation to the other children and their parents to protect everyone's well being, and so I discussed with the biter's parents a strategy to curtail this new behavior.

His parents decided that I should say "No!" and immediately 'tap' him right next to his mouth so he would know exactly what he was doing that was forbidden. (I watched him like a hawk so I could catch him right as he was about to bite. Such communication with the very young transgressor must be immediate!) After that I would set him down far from the child he had just tried to bite and offer him a different toy. This worked surprisingly well. After three or four attempted bites over the course of two or three days, he stopped biting.

Older children who understand language and who can make the connections between their misbehavior and delayed punishments (losing desert, having a toy confiscated, not being allowed to watch TV or play with friends) need never be spanked. Striking them really does send the wrong message.

A long time ago, before they invented the inserts that protect young children from electrical outlets, and when parents had many more children typically and could not watch their every single move, it was more obvious that children needed to know how to be obedient. Nowadays we put up child gates to keep kids out of kitchens, staircases, laundry rooms etc,and we dread visiting homes that are not "child friendly". The onus has shifted to grownups to anticipate and prevent all problems. The inserts, the gates, the latches.....these are all good, but they are ways to increase a young child's safety. They do not supplant the basic safety that comes from a child knowing to stop when their parent says so. After all, not every dangerous situation can be anticipated.
Posted by kerfuffler at 7:18 AM

Very good point. Calla Lilly got the only real spanking of her life when I caught her, when she was 2, playing in the gutter--of a very busy street that ran next to our apartment complex. Of course, I had to take her to the grocery store the next day, she asked for sugared cereal (as she always did.) I said "No," as I always did. Unlike her usual pouting after being rebuffed, she screamed "MOMMY DON"T HIT ME!!!!" All the other mommies in the store (it was Provo, Utah in 1984, there were wall-to-wall mommies) looked at me like I was a child murderer.

How embarrassing. Too funny!

Calla Lily, being an actual child, remembered (I assume) with great glee the excellent response said yell got her. I had to endure it (quietly) for several weeks every time she wanted something in public before she forgot.