The Station fire appears to be getting the better of the Mount Wilson observatory.

Update, 12:10 p.m. EDT Monday: Dave Jurasevich writes here:
"I was able to get back up to the Observatory [Sunday] by hitching a ride on a Fire Department helicopter and we were able to ready all of our infrastructure systems for the upcoming burn. At 7:30 a.m. [Monday] morning all of the firefighters were ordered off Mount Wilson because of the imminent danger, so we were also asked to leave rather than shelter-in-place in the 100-inch dome. . . . The Mount Wilson Observatory is now in the hands of the big air tankers and God. I’m really heartbroken." 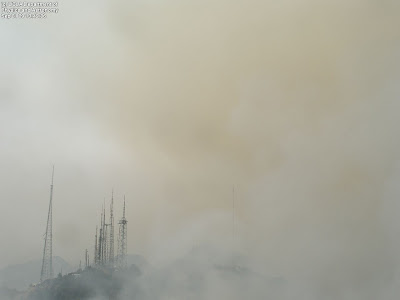 Update to the update: It appears that firefighters have reoccupied Mt. Wilson and are burning off the bush-fuel. Here's a picture taken about 5:00 PST from some LA TV station, the smoke is from controlled burns. Good luck, observatory. 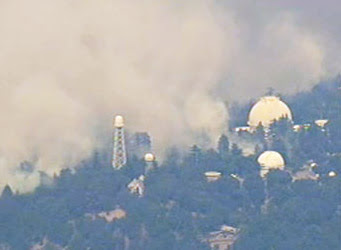 I really hope it's ok