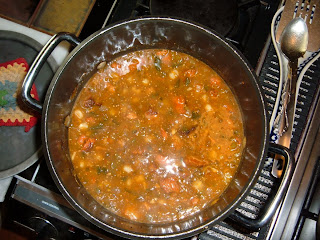 Every year for her birthday, Calla Lily requests Posole. Many moons ago, I checked out a long-since-forgotten book out of the library that had a recipe for New Mexico Green Chile Posole. It was a huge hit. The exact nature of the original recipe has long since been forgotten, but my Posole Jones remains. Depending on where we are, and what the stores are stocking, making Posole can be quite a challenge. Several times I've had difficulties getting tomatillos--substituting many fresh containers of green salsa This year I tried something different.  It seems to have been a hit.  So, this rather protracted post.
Ingredients:
2 lbs Pork:  The pork will be eaten in a stew, and so needs to be cut up into bite-sized pieces.  I've purchased many different cuts--last year at "New Seasons,"  I described what I wanted and the (adorable and) helpful butcher went into the back and came out with a three pound chunk of completely fresh pork shoulder.  He told me they just barely got a fresh pig that they hadn't sliced and diced.  It was good, but wrestling the meat into a neat inchish dice took me way longer than one would expect.  The pig got his revenge.  This year, I had a brilliant moment (it only took me about 12 years) and so went directly to a Mexican market.  They had pork adobo. What a brilliant idea!  Pork meat already in stew-sized chunks, marinated (with bonus pineapple) all for about half of what the meat at New Seasons cost me.  I got a pound, along with a pound of sliced (beautiful) unseasoned pork.  Win.
The pork should be browned prior to being placed in the soup.  In past years I have browned it with some olive oil in a frying pan (as high as the heat will go.)  This year, because the pork adobo came with a sauce, I couldn't brown it in a frying pan--it would poach instead.  So, I spread the pork into a 9X12 baking dish, put the top rack in the oven onto the second-highest position, turned the oven to broil, and placed the baking dish in the oven.  Watching carefully, I pulled it out about every 5 minutes and stirred.  The meat browned beautifully.  When doing this, do not step away from the oven for any reason.  Turn the oven off if you must leave the kitchen.  I set a timer and busied myself with important tasks like chopping onions between stirs.
Cook until nice and brown. You'll know it when you see it, it won't be burned, but it will be nice and darkish--you'll want to eat it right there. You know those adobo tacos you get in the really cheap street-side taco stands that are so good? It should look like that meat.  Turn the oven off.  At this stage, you may want to pour some of the liquid you'll be using for the stew into the pan to stop the cooking; I suggest either some chicken broth or white wine.   About 1/2 cup should do it.
When the meat is almost done, get out your soup pot, and put it on the stove.  Put in
2 tablespoons Olive Oil;
turn the  stove up to about medium high heat.  I should mention some people substitute chicken for pork in Posole.  Inventive ones have even been known to use beef.  Eeek!
Chop up:
1 big yellow onion (not a sweet onion, not a red onion, the oniony yellow kind.)  You can use more if you want.  Chop into about a 1/4 inch dice, place into the soup pot that's been heating.  Stir occasionally.
While the onion is cooking, chop up
4ish cloves of garlic, the put in pan with the onion.  Chop, stir, chop, stir. 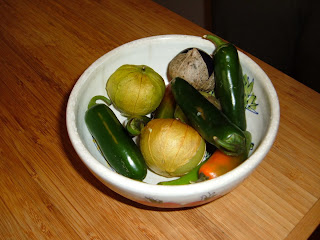 Chop a mixture of peppers; how many and the type depends on what's available and how hot you want the stew.  A good rule of thumb is to have at least two cups of assorted peppers.  I like to add a couple poblano peppers if I can find them; they look like darker, pointier green peppers, but have a lovely medium hot taste.  A couple of very finely chopped jalopeno peppers should always be a part of the mix; even if you don't particularly like heat, jalapenos add a wonderful taste.  What's the very best is to have a source for fresh roasted green peppers. This has happened to me, like, twice.  But if you should stumble upon a roaster, consider rushing right out and making a batch of soup.  Oh, Serrano peppers (the skinny one in the picture) add a lovely hotness.  In a pinch, or the midwest, green peppers will do.  Add them to the onions in the soup pan as you chop.  Don't forget to stir the soup. 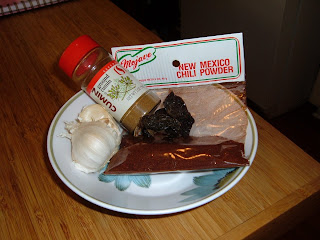 Add ground spices.  Again, this is a matter of taste.  I recommend:
1 tablespoon cumin,
1 tablespoon New Mexico Chili Powder.  This is a mildish chili; it has a lovely taste and won't add too much heat.  If you want your chili hotter, I recommend Chili de arbol--a must for my beef and bean chili, but I generally leave it out of the Posole.
Let the spices and onion mixture cook until the onions are soft.
Then add to the soup pot:
The pork from the oven (remember it?)
4 cups chicken broth
1 large (32 oz.)  and 1 small can (16 oz.) hominy, rinsed.  This is what makes the soup a Posole.  Pretty much everything else can be substituted, not this.  Rumor has it some Mexican stores have frozen hominy, which is supposed to taste even better, but I have never found it.  I suspect it's unicorn fodder.
About 8 oz. canned green chilis.
Two large (32 oz.) cans tomatillos, rinsed, and whirred around in the blender. 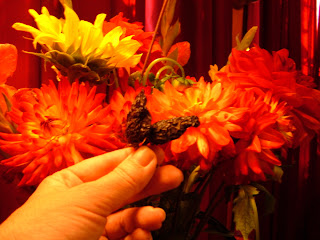 You might also consider tossing in a couple/three chipotle peppers into the soup. I always do if I have them handy. At some point last year, I ran out, and made the serious mistake of looking for them in the fancy-pants grocery nearby. Quelle horreur! Dear reader, I bought those overpriced wonderful smokey peppers, because I had little time, and couldn't imagine my dish without them. Since then, I've stocked up at the Mexican market and saved my pocketbook.
If you don't have fresh oregano, add about 1 tablespoon dried oregano (Mexican, if you have it.) 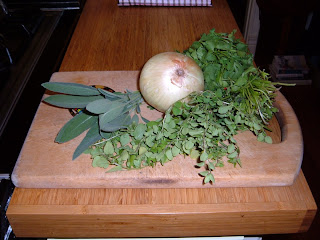 Cook at medium-low heat for about two hours; check often, adding more chicken broth as needed.   The soup should just barely be simmering.  About a half-hour prior to serving, if you have it, add a couple tablespoons of fresh sage and/or oregano  (to taste.)  Don't add too soon, as the herbs can turn bitter if cooked too long.
Just prior to serving, chop 1/4 cup cilantro and put into a bowl.  Cut a couple of lemons or limes into wedges and put them in a separate bowl.If you're feeling frisky, you might also chop up some extra onion extra-fine.    Serve soup with the condiments.    Many people also enjoy tortilla chips with their soup.
Last step:   Eat.  (Don't forget.)
Posted by djinn at 2:26 PM

Email ThisBlogThis!Share to TwitterShare to FacebookShare to Pinterest
Labels: Recipes

But when will there be pastries?