Your Money or Your Life------Robbery Notes 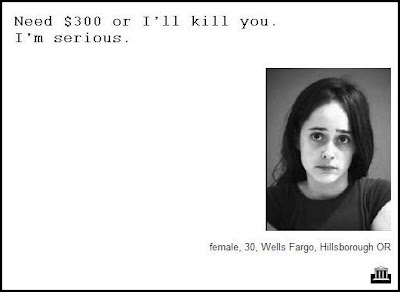 There are more where this came from.

They reminds me of a story from my sophomore year roommate. Her family owned a couple of McDonalds in tough neighborhoods of Detroit where the crime rate was pretty bad. One robber was not counting on the toughness of the staff who worked there. The robber waited in line, but when he was up to the counter, he pulled out a gun and demanded that the cashier give him all the money. Rather than cowering, the cashier leaned forward over the register, and said slowly,"I can't open the register unless I ring up an order!"

The robber was surprised by this deviation from his expected script, so he paused for several stunned moments. "....Uh.....uh.......OK, I'll have a cheeseburger!"

"Would you like something to go with that? Fries or a beverage?"

The man started to reach for his wallet before he caught himself, whereupon he waved his gun about menacingly, and demanded that she make with the cash.

I'd like to report that he was caught, but he got away, at least that time. I expect he was caught during a similar robbery later. These small time crooks always keep at it until they are caught....
Posted by kerfuffler at 7:04 AM

Email ThisBlogThis!Share to TwitterShare to FacebookShare to Pinterest
Labels: friends, humor, random, Why don't we have a stupid tag?

My new hero. "Will you have fries with that" has now taken on new meaning. And what a meaning.