Extra-easy single-pan fall soup. Plus too delicious for left-overs. 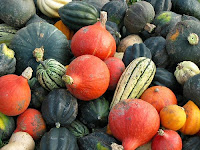 My dear sis told me about this soup; I modified it a bit to make it easier; it turned out quite simple to make and unexpectedly tasty!

For starters, you'll need an oven-proof pan big enough to hold the finished soup, but preferably not with really steep sides, to more effectively roast the vegetables. I use a steep-sided frying pan that doesn't seem to be made anymore; a dutch oven would work as well, but mine died a sad, sad death of overwork after about 25 years, and has yet to be replaced. So, in retrospect, any pan big enough to hold the finished soup, that will fit in the oven, and can be heated on the stove will work.

Four slices Bacon: (Optional) Fry them up the the pan that you're making the soup in till they're nice and crisp. Take the bacon out, but leave the rendered bacon fat. Chop the crispy bacon into a fine dice.

A winter squash, about 2 pounds, or so. I used a butternut squash, but banana squash, a leftover pumpkin, or any of those odd types whose names I can never remember would also work.

Two-three apples, depending on size
A medium-sized onion

Prepare the squash. If it is a whole squash, cut it in half, and clean out the seeds. If it's a piece of a much larger squash with no seeds, just put it in the pan, being sure to remove any sort of plastic wrap (long story not told here, but I'm sure you can imagine.)

Peel, core, and chop the apples. Put in pan. If you like apple peel, you might want to leave a bit on.

Chop onion in about a 1/2 inch dice and put in pan.

(You can put some garlic in here, too, should you care to.)

Stir everything to cover with the bacon grease.

If you're not using the bacon, then put in about 2 Tablespoons of olive oil over the mixture in the pan, and cover all the vegetables. I use my hands. I also try to place the apples and the onions in the hollowed out portions of the squash.

Place in oven, at 350 degrees for about 45 minutes. Check about half-way through, If it looks like some onion bits are getting burned, pour in a little liquid.

Afer about 45 minutes, tale the pan out of oven; poke squash to make sure it's done. If not, back in the oven for a bit.

Once you're convinced squash is pretty much squishy enough to eat, take out of oven and let sit for 10ish minutes.

Then, scrape squash (in the pan) from the squash peel on the outside. Throw the peel out. I find this method of dealing with squash much easier than hacking some uncooked cement-like vegetable into cubes, and then individually peeling them.

Pour in about two cups of broth--chicken is what I used; for you vegetarians, vegetable broth works as well.

Add the bacon.
Chop up the sage, and add. Fresh Rosemary could also be used. 1/2 teaspoon sage can be substituted for the fresh sage.
As an added bit of interesting and unexpected tast which deepens the flavor, sprinkle in a bit of nutmeg (1/4 teaspoon) and ginger (to taste, about 1/2 teaspoon). The sweetness of the squash and the apple is brought out by the unexpected flavors of the nutmeg and ginger, plus the ginger give it just a hint of a bite.

Salt and pepper to taste. I used about 1/2 teaspoon alder smoked salt (yum yum) and about 12 turns of the fresh pepper grinder.


If you are using it, pour in about a half cup of white wine--marsala is preferred. You could also use some sherry or port--something with a nutty flavor; though I'd only use about 1/4 cup of those. If no wine, add some sort of acid such as lemon (preferably) or even a bit of balsamic vinegar (no more than a tablespoon).

Cook to a full boil (this will evaporate all alcohol.) Stir and scrape the pan to get all the yummy bits from the baking up into the soup itself. If you have a potato masher, mash away to mix all the roased vegetables. You may need to add more liquid to the soup.

At the last minute, stir in a half-cup or so of cream/ half & half or yogurt; heat a bit more, but do not boil. Serve.

In spite of the pages of instructions, this soup really takes just a few minutes to prepare--15 minutes slicing for the original vegetable mixture; a nice break while everything is baking quietly in the oven; the finishing touches on the stovetop requires very little extra work. Plus, that one pan clean-up is a total breeze.

I made this last night and there was not a single leftover. None. I was hoping for some for breakfast.

I'll try to make this again, with pictures!

4 slices bacon, diced; or 2 Tbsp Olive Oil.
One 2 or so pound squash, cut in half and cleaned
2 or so apples, peeled, cored and diced
1 medium onion, in about a half-inch dice
A couple cloves of garlic, chopped

Two-three cups of broth (chicken or vegetable)
1/2 cup wine or other liquid with a bit of acid (such as a squeeze of lemon, or some balsamic vinegar)

A half cup or so of one of heavy cream, half and half, or yogurt

Thanks to http://tinyfarmblog.com/tag/acorn-squash/ for the squash picture. I hope to take one one of my own at farmers market today.

A special thanks to George who, truth must be told, did most of the work. But I can point and order around with the best of them.
Posted by djinn at 8:59 AM

Email ThisBlogThis!Share to TwitterShare to FacebookShare to Pinterest
Labels: cooking.

yum..I am going to have to try this recipe, thanks for sharing!

I just purchased a Uchiki Kuri, which should be perfect. It has a chestnut like flavor when roasted ...now I am hungry and the ribs aren't done!:)!

I just cooked a Kuri squash for the first time last week, and it went over well. I did not put it in a soup; we enjoyed it mashed up after roasting and adding the traditional brown sugar and butter. We wanted to compare the flavor with butternut squash----we cooked them side by side. We preferred the Kuri. Should be good in the soup.