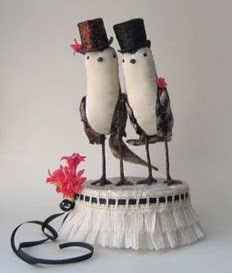 Many religious groups have been fighting vigorously against the passage of legislation that would allow gay marriage in the USA: the Mormons, the Catholics, and several Protestant denominations. The very size of the Catholic church, though, make its objections particularly influential.

Frankly, all these religious objections seem entirely bogus to me. Not all religions have to define marriage the same way. That is what religious freedom means. For example, although people of other faiths can get divorced and then marry other people in their churches, this does not force the Catholic church to perform, recognize or permit these unions for their congregants. Catholics who wish to remarry must do so outside the church.

So, even if gay marriages were recognized by our civil institutions, the Catholic church and all these other faiths could keep right on not defining marriage that way for their own congregants.

In fact, it is a grotesque violation of the separation of church and state for the State to prefer the definitions of marriage of some denominations over others. Many religions already accept a definition of marriage that includes gay unions, so all these faiths are being discriminated against by our government's policy.

The Catholic church is now throwing its weight around again, threatening to stop feeding the homeless over objections to a city provision (in DC)that would allow same sex marriage. Read (and enjoy) Allison Kilkenny's offensive (in a good way) screed about this flap.

Here is a snippet:

The Catholic Archdiocese of Washington said Wednesday that it will be unable to continue the social service programs it runs for the District if the city doesn't change a proposed same-sex marriage law, a threat that could affect tens of thousands of people the church helps with adoption, homelessness and health care.

Yup, that's right. If gay folk can marry, the Catholic church refuses to feed the homeless.

Well, that all seems very reasonable. After all, the state would force the Catholic church to perform gay marriages, and celebrate the beastly unions, right?

Under the bill, headed for a D.C. Council vote next month, religious organizations would not be required to perform or make space available for same-sex weddings. But they would have to obey city laws prohibiting discrimination against gay men and lesbians.

Oh. So this "Please Stop Being An Asshole, You Guys" law is really the thing that has sent the Archdiocese flying off a cliff. The child molestations, and filing sticky-fingered priests from diocese to diocese is all part of God's grand plan, but showing the slightest bit of consideration for gay couples is just too much.

Meanwhile, Portugal (not a city, nor a state, but an entire country, and a Catholic one at that!) is poised to accept gay marriage.
Posted by kerfuffler at 10:23 AM

Spain already accepts gay marriage, as does that mysterious land to our north otherwise known as Canada (eeek!), the Netherlands, Belgium, Norway and Sweden. Heavens we should follow in their footsteps and rank sky high on international standards of happiness, healthiness, and well-being. Can't have that, oh no, oh, no.

One pretty much expects us Amuricans to lag behind Norway, Denmark, Belgium and Sweden in this sort of thing.

But when even Catholic countries like Spain and Portugal are able to recognize such civil rights, that really shows us up.

Our country needs to get it's act together.