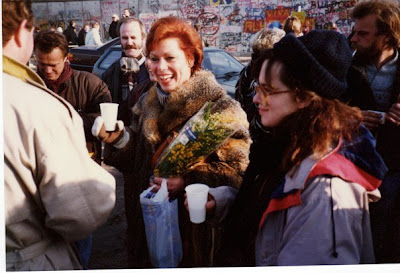 Email ThisBlogThis!Share to TwitterShare to FacebookShare to Pinterest
Labels: history

Wow, you used to look just like Carol Burnett! %D

You silly, I'm the one on the side with the obviously borrowed silver coat and the strangely large glasses.

You can't see it in the photo, but that woman had the largest bottle of champagne I've ever seen actually open. I think the size is called a Jeroboam, or one of those other minor prophets.

Though I must say, "Carol," there, is wearing a truly magnificent coat.

I was teasing-----Carol Burnett looks way too old to have been you back then! (peculiar sentence award!) My goodness, you looked like a college student.

I was teasing too. Obviously, I have to get over my deep seated fear of emoticons. : - >

And were they sharing the champagne all around? It looks like you had a cup.

Yes, Carol was. And yes, I had a cup. She came equipped both with gigantic bottle, gigantic helper (for bottle) and cups.

With such organization you could tell she was a real German.

still giggling over this banter (in german of course...)

I wish I knew how to giggle in German!

My experience with the Swiss is similar. Instead, portly men wearing bowlers carry around tiny dogs in baskets. We get to laugh, instead.

holding straight face--hee-hee-hee (my German giggle - felt my Grandfathers cuff me on the back of the head...)

Still no German giggling possible for me-----sounds more like yodeling. Must find suitable audio----Simone, can you upload giggle to u-tube? 8D

you're a treasure! That really cracked me up. When I do a post on "(deleted for suspense)" I just may use that clip.