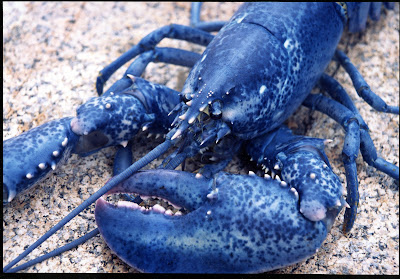 Blue Lobsters are caused by a mutation that creates an excess of a certain protein. They used to think that such lobsters were a one in a million occurrence, but now believe they are twice as rare as that (one in two million).

BTW, isn't that lobster a looker?
Posted by kerfuffler at 12:04 PM

Beautiful! The art nature produces sigh...but the evil side of me wonders if it tastes better ...

I think they always throw them back now or put them in public aquariums.