Things to Bear in Mind

During the first half of 2008 (until June 19) over 2600
rockets were fired into Israel from Gaza. After a negotiated ceasefire which Gaza broke 65 times-----yes, that's right, they launched 65 more rockets without Israel striking back----the violence escalated again when Israel targeted an illegal tunnel being built for smuggling weapons. In response, Hamas resumed frequent shelling. Hundreds of rockets were launched from Gaza in December. Funny thing is, I did not hear about any of this from our "biased, pro-Israel" media until the moment when Israel ultimately decided to fire back.

It is true that thePalestinian rockets were primitive, and only rarely caused deaths and injuries. But Hamas has declared war on the state of Israel in the very language of it's official charter. They do not seek a two state solution; Hamas will not stop fighting until the destruction of the State of Israel, and the establishment of a Wahhabist (Sunni fundamentalist) state in all of Palestine. Should Israel have to wait until they can arm themselves with more sophisticated gadgetry to make it a fair fight?

It's true that the images coming out of the conflict are disturbing. Israel is trying not to harm civilians, but when the extremists use the population as human shields, tragic results are inevitable. Furthermore there are other images that reveal another dimension of this problem. For example the image below shows Palestinian children being trained how to use rockets. 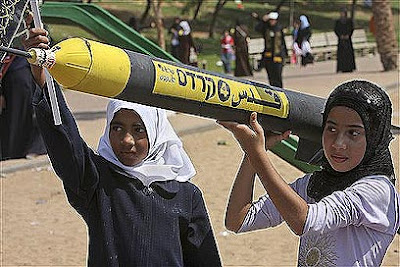 In the Summer of 2008, tens of thousands of Palestinian children were sent to camps where they were trained to crawl under barbed wire and fire rockets.

One more thing, speaking of pornography -- we've all seen endless pictures of dead Palestinian children now. It's a terrible, ghastly, horrible thing, the deaths of children, and for the parents it doesn't matter if they were killed by accident or by mistake. But ask yourselves this: Why are these pictures so omnipresent? I'll tell you why, again from firsthand, and repeated, experience: Hamas (and the Aksa Brigades, and Islamic Jihad, the whole bunch) prevents the burial, or even preparation of the bodies for burial, until the bodies are used as props in the Palestinian Passion Play. Once, in Khan Younis, I actually saw gunmen unwrap a shrouded body, carry it a hundred yards and position it atop a pile of rubble -- and then wait a half-hour until photographers showed. It was one of the more horrible things I've seen in my life. And it's typical of Hamas. If reporters would probe deeper, they'd learn the awful truth of Hamas. But Palestinian moral failings are not of great interest to many people.

Posted by kerfuffler at 8:33 AM

Another couple things to bear in mind: as Rabbi Michael Lerner pointed out in a recent essay, "Hamas had respected the previously negotiated ceasefire except when Israel used the ceasefire as cover to make assassination raids against Hamas and other Palestinian leaders ("Rabbi Lerner on Israel in Gaza")." In other words, Israel broke the truce.

Also, we need to recognize why many Palestinians do not want a two-state solution. Zionists convinced Britain and the U.N. to create a specifically Jewish state in a land already occupied by another ethnic group, without giving any consideration to the prior inhabitants. Whatever happened to government deriving its power from the consent of the governed? Until we and Israel acknowledges and come to terms with that outrage, they will never establish any sort of peace. All their "self-defense" will merely create more heads on the hydra.

The actual demographic history is much more complicated. The simple plot line of a mass immigration of Jews displacing millions of Palestinians is a disingenuous oversimplification. Sound bytes being what they are, this is the notion that persists.

You are correct, the history is very complicated. But no matter how complicated, the fact remains that the indigenous Palestinians had no voice in the creation of the state encompassing the region in which they were the majority. Given that we believe that government derives its authority from the consent of the governed, this is a grave injustice.

And that it is why there needs to be a two state solution. Self determination can flourish in both states. Palestinians need their leadership to promote their own best interests, not merely the destruction of Israel at all costs.

Unfortunately religious extremists have by and large taken over the leadership of the Palestinians, and not really because "they speak for the people". Moderate Palestinians have been killed and intimidated. The education of Palestinian youngsters is rife with hateful screeds. They provoke assaults by Israel to further radicalize both sides, and sadly have been quite effective at this.

Back when Palestinian extremists were blowing up buses of Israeli school children, the goal was to create life long enemies. Seems like they succeeded.

Don't forget that the very first Knesset (1949) had Arabic members, and continues to include them to this day.

I would imagine that it was Zionist extremists, who insisted on creating a state predisposed to their interests in a land occupied by others, who first created life-long enemies.

Yes, there were non-Jewish Palestinians in the Knesset. But the Palestinians had no consent in the creation of a Knesset, or the form it would take. And the government of Israel denies certain political rights to any non-Jews.

It seems a rather extreme characterization to label all the Israeli freedom fighters "Zionist Extremists". There were no doubt some in 1947, but there are probably more now in response to decades of Arabs trying to wipe all Israelis off the map.

Israelis have for decades tried to reach an accommodation with the Palestinians, and are losing hope that they will ever have a partner in sincere negotiations.
Arafat would make nice in the West and then say completely contradictory things in Arabic in Middle Eastern countries. He turned down a final status treaty with Rabin in the mid nineties that was so generous that eventually Rabin was shot for having proffered it---- by an actual Zionist extremist. (I remember reading how disappointed the Palestinian negotiators were when Arafat turned this offer down. One reputedly wept.)

As far as making enemies goes, the British did everything in their power during the mandate years to foment distrust between the two communities. ( You know, the old divide and conquer strategy.) If only the Arabs had not taken up arms against the Jews when the British were being kicked out. The British were so angry at the Jews they gave a lot of their own weaponry to the Arabs.

By "Zionist extremists," I don't mean all Israelis, or even all Israeli military personal/leadership. I do mean those who insisted on creating a specifically Jewish state in a previously occupied territory. That deplorable goal, and the idea that somehow being Jewish made their claims more valid or important than that of those already living there, is the definition of extremist Zionism.

Yes, the Israelis have been trying to reach accomodation with Palestine. And as long as they insist on that accommodation be on their terms--that the land and political authority which they had taken from others is theirs unchallenged--the attempts at "accommodation" are superficial.

Yes, the British were masters of setting local populations against one another. The British Empire was full of such deplorable tactics. But who can blame the Arabs for taking their arms and fighting after the Zionists, impatient to wait for the official process, turned arms on the British and Palestinians to take the land? Wouldn't we be tempted to do the same thing if the federal government said that the state in which you lived was being given over to some particular cultural/ethnic group to set up a government of their choosing, in which their ethnic group would be given special considerations, all done without you even having the opportunity to have a say in the process? You can bet there would be plenty of militias fighting every bit as hard as the Palestinians; and while you and I as liberals would probably refuse to take part in the violence, I would be mad as hell at the injustice of the handover. Wouldn't you?

Don't forget that the "rockets" are Rube Goldberg devices powered by fertilizer and ignited using a nail. They're not rockets; they're "rockets."

http://en.wikipedia.org/wiki/Qassam_rocket
The aim of the Qassam rocket design appears to be ease and speed of manufacture, using common tools and components. To this end, the rockets are propelled by a solid mixture of sugar and potassium nitrate, a widely available fertilizer. The warhead is filled with smuggled or scavenged TNT and urea nitrate, another common fertilizer.[9]
The rocket consists of a steel cylinder, containing a rectangular block of the propellant. A steel plate which forms and supports the nozzles is spot-welded to the base of the cylinder. The warhead consists of a simple metal shell surrounding the explosives, and is triggered by a fuze constructed using a simple firearm cartridge, a spring and a nail.[9]
While early designs used a single nozzle which screwed into the base, recent rockets use a seven-nozzle design, with the nozzles drilled directly into the rocket baseplate. This change both increases the tolerance of the rocket to small nozzle design defects, and eases manufacture by allowing the use of a drill rather than a lathe during manufacture due to the smaller nozzle size. Unlike many other rockets, the nozzles are not canted, which means the rocket does not spin about its axis during flight. While this results in a significant decrease in accuracy, it greatly simplifies rocket manufacture and the launch systems required.[9]