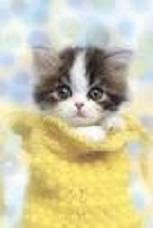 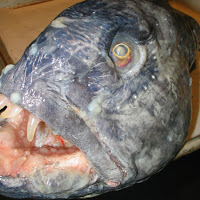 PETA has begun a new campaign to protect fish from human consumption. Their new strategy is to "re-brand" fish as "sea kittens". That is, they aim to teach youngsters to think of fish as kittens so that they will be reluctant to eat them.

If children were taught to refer to fish as "sea kittens," reflecting that fish, like cats and dogs, are "individuals" that "do have friendships," fewer fish might be killed for food or sport, said Pulin Modi, a PETA spokesman.

It is unclear in what venues they plan to implement their educational initiative, but so far they have contacted Spearfish High School in South Dakota and asked them to change their name to Sea Kitten High School. (The principal was not convinced.)

In principle I am not opposed to the idea of people replacing animal protein with other protein sources. People make such decisions for a variety of reasons: health, the environment, ethical qualms or squeamishness.

Three things bother me about this initiative, however. First of all, they are not attempting to convince people by using the truth. They are marketing a falsehood, namely that fish are just like kittens. Not only are they equating fish with mammals, but by calling them kittens rather than cats, they are disingenuously ascribing 'baby status' to all fish. That's right, anyone who eats fish is killing babies.

I also find it objectionable that they are merely trying to make fish seem cute to make it seem wrong to hurt them. If fish were ugly, cold and slimy rather than warm, cute and fuzzy then they wouldn't merit protection or compassion. What kind of moral lesson is that to teach children? 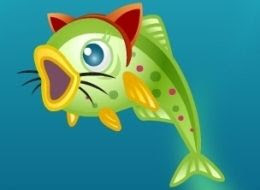 But what bothers me most of all is that this dishonest campaign targets young children.
It's fine to approach teenagers with facts and questions that can allow them to make their own decisions in a rational, informed way. But brainwashing little kids that eating fish is evil with a cadre of cute fish caricatures is unethical. Young children's diets should be determined by parents and pediatricians. These dishonest animal rights activists should butt out of the decisions that families make. (I'd be happy if young children were protected from all marketing, frankly.)
I don't see PETA having any success with this laughable campaign. They might cause some short lived friction at the dinner table, but when little kids figure out that most fish are not particularly cute, their support for fish rights will dissipate. PETA would probably have better luck protecting fish by noting how frequently it smells bad.

(The cute kitten in a bag poster is available at www.popartuk.com/photography/keith-kimberlin/..)
Posted by kerfuffler at 10:27 AM

Sea Kittens? Fish are not fluffy; they do not purr, and I have yet to hear of a fish learning to use the litterbox. Plus, and most important of all, when you are reading a Trollope novel, or perhaps Jane Austen, the chances of a fish cuddling in your lap are slim to none. Epic Fail.