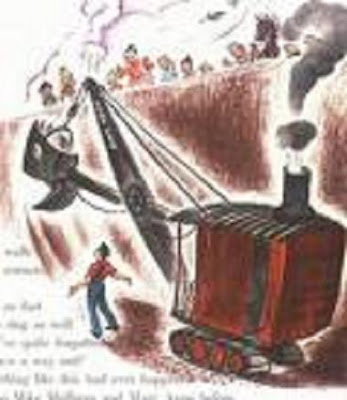 I have been hearing a lot of Republicans complaining about the anticipated stimulus spending. They typically sum it up by saying that when you are in a deep hole, first you need to stop digging. Actually, if the hole you are in is deep enough that you cannot simply climb out, then digging is an excellent way out! No, you don't dig through the center of the earth; you dig a ramp that you can walk up! The key thing is to change the direction of the digging.

So if I try to force this metaphor, I would say we do need the government to spend a lot, but that they have to choose different things to spend on. They need to choose investments for the country that really pay off. Hoover Dam was an extremely expensive project, but it has paid for itself many times over. ( In addition to providing energy, it protected a vast region of sunny fertile ground from regular flooding that impeded successful agriculture.) Better flood protection for New Orleans could have saved a bundle. Investing in alternative energy and scientific research would have payoffs for the future. Improving our educational system and providing tuition assistance could pay off as well, as could timely maintenance of bridges and infrastructure and new mass transit initiatives.

If, on the other hand, they mostly fill a bunch of potholes, and build some new roads that contribute to sprawl, we are going to hit an economic wall in a few years. It's kind of like the government is a teenager that has stolen our (the parent's) credit card, and run up thousands of dollars in spending. If we discover that the teen has bought an education, or a vehicle for going to work, or a computer or even a lawnmower, we will figure that they will be able to pay it pack eventually. If on the other hand they spent it all on incessant text messages (bureaucratic excess), nail extensions(inaugural glitz), beer, tattoos and sparklers, (War in Iraq) we will realize that that money is simply gone.

The real problem with this second metaphor is that it misses one tragic aspect of our true situation. Rather that a teen stealing from his/her parents, it will be us foisting this economic mess on our children if we (& our government) don't get it right.


(Anyone having trouble visualizing digging an exit ramp should read Mike Mulligan And His Steam Shovel by Virginia Lee Burton, the source of the above pic.)
Posted by kerfuffler at 12:38 PM

Email ThisBlogThis!Share to TwitterShare to FacebookShare to Pinterest
Labels: finance