So how much oil is actually spilling into the Gulf Coast? 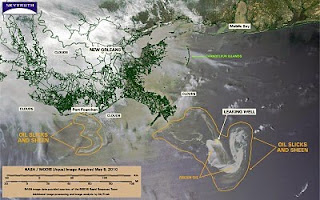 Reading the most scientific reports that use the latest satellite data, it appears to be somewhere between 20,000 and 25,000 gal/day. That's a lot. The 5,000 gal/day number being knocked around the media appears to be BP spin--I'm guessing its the first shot across the bow of the American public to make us pay for this total screw-up by a company that should have known so much better.

But the Bush regime thought self-regulation was the way to go. BP self-regulated themselves to 11 people dead and unspeakable environmental damage. Who's going to pay for that damage? You and I, the American public, that's who. Anti-regulation really means privatizing the profits (they go to the company) and socializing the losses (that's us, the American people, who get stuck with the bill of cleaning up this mess.

And this mess could get much worse.
Posted by djinn at 9:42 PM