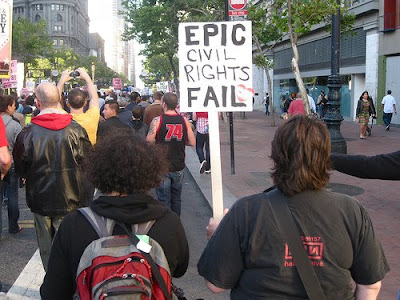 We now all know that the California Supreme Court ruled for Proposition 8. However, the ruling was on the narrowest possible grounds. To quote (page 37) "Proposition 8 reasonably must be interpreted in a limited fashion as eliminating only the right of same-sex couples to equal access to the designation of marriage, and as not otherwise affecting the constitutional right of those couples to establish an officially recognized family
relationship." (Emphasis added.)

In non-lawyer-speak, opposite couples get the sequence of letters M * A * R * R * I * A * G *E, Same sex couples get all the rights that "traditionally" go with the word marriage. So, the battle was over a couple of phonemes.

in all other respects same-sex couples retain the same substantive protections embodied in the state constitutional rights of privacy and due process as those accorded to opposite-sex couples and the same broad protections under the state equal protection clause that are set forth in the majority opinion in the Marriage Cases, including the general principle that sexual orientation constitutes a suspect classification and that statutes according differential treatment on the basis of sexual orientation are constitutionally permissible only if they satisfy the strict scrutiny standard of review.

p. 41
Shorter version: second verse, same as the first. Except louder and stronger. Same-sex, uh, nuptials, have exactly the same rights as those other ones.

Oh, but this is not sufficient. Why is actual marriage (I'm looking at you DOMA) important? Read this story of a woman and her three chidren unable to visit their dying partner/mother Lisa Pond because they had the misfortune of being in Florida when Lisa collapsed with a brain aneurysm. Family values? As I have said previously, only for very small values of "family."

Just another example of those that rather mysteriously call themselves "Pro-Family" kneecapping actual families.
Posted by djinn at 2:52 PM

Email ThisBlogThis!Share to TwitterShare to FacebookShare to Pinterest
Labels: get a clue, hating haters is good for the heart, political rants