Review of Thurston Moore and Jandek Performance in Portland; Thurston is a God. 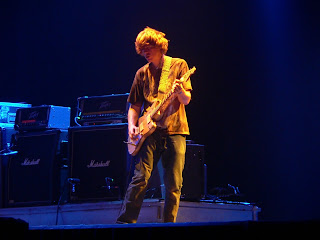 "Jandek's not pretentious, but only pretentious people like his music." -- Kurt Cobain

"Thurston Moore is Magic, and simutaneously looks his age and 15." -- Me

Last night, April 29, 2010, George and I went to a Thurson Moore - Jandek concert at the Hollywood Theater, a movie-house that holds about 400 people.  The great bulk of the audience either weren't from Portland or were from a vastly different section than from whence I live.  Shoes To Die For.  Silk charmeuse dresses not repurposed from the Goodwill.  Shades of Black and Grey, predominantly.  Stunning clothing on stunning people.   Oh, and there was music.

I have never heard anyone play a guitar like Thurston did  (I've heard him twice before with Sonic Youth - this was infinitely better).  He played every inch of the electric guitar;  below the bridge, above the nut (on the headstock), banging the back of the neck...  not to mention the sounds the got out of that plank of wood that i didn't think was possible.  Plus the shaped feedback  he, uh, shaped by standing in front of the Fender amp bending the neck of his stripped-down jazzmaster covered with stickers.  I'm still in shock.  Jimi (yes, that Jimi) would be proud.  (Note, pic not from show, as requested.  Thurston amps were definitely Fender, and his shirt was plaid. Other than that, pretty much the same.)

Jandek, meanwhle had a couple of themes he kept repeating.  Over and over.  Admittedly, he was playing with the whole idea of the twelve-tone scale, but just barely; how many flatted 7ths with the occasional 9th and 11th thrown in can you listen to until you thow in the towel?  Thurtson used the entire palate of the guitar and an object from which to wrench sounds.  Strings were involved, but just as a single choice out of the many presented.

There were three improvised songs. In the first song, Jandek just stopped suddenly, leaving Thurston the job of crafting an ending, which he did so effortlessly it seemed pre-written.  In the second one, Jandek actually started with a different motif--it included the occasional major chord fragment--hallelujah.  However, about half way through, I think Mr. J. figured out he wasn't the center of the universe and went back to his 7flat (occasionally 7sharp) 9th 11th 4th default.  Actual notes or note fragments would surface from Thurston's sound palate at irregular intervals that would cross notes with Jandek at equally irregular intervals--it kept the the ear interested and gave at least the illusion that the two were playing together.
Thurston continued  wrenching such amazing sounds from his guitar, while all the time looking like a Raphael saint.  You know, one of those just-this-shy-of-angelic putti that just might pull his pants down and moon his audience.  For the third song, Jandek sat on the stage; Thurston sat on a bar stool, which, considering the length of his legs looked like a normal chair, but oddly morphed. 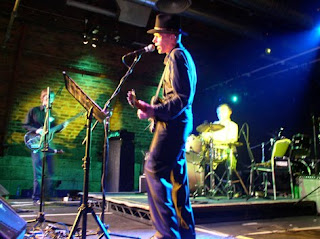 After an hour and 20 minutes,  (but it seemed like moments) Jandek turned off his amp, and that was it.  Not to totally hate on the mystery man, his hat was totally rockin'.  (The image is not from the show, where we were not asked to take pics, but other than the mike, this is a dead ringer for the Jandek we saw.)

From an interview with Thurston in 2000 somewhere on the internet:


"What I'm aiming for all the time when we play live is a balance between the high energy of loud music, and a calm meditational energy you sometimes find at its core. Recording tends to restrict too much experimentation, 'cause when you're making a record it's a part of you, for that time it's your whole fabric. But when we tour the songs, they tend to get more and more expansive, and actually evolve over time until they are something quite different. For this reason I never go back and listen to the recorded document. The thrill, instead of listening to our cds, comes when the balance I was talking about can be attained. Everyone in the room can have a shared, communal rock experience. I'm only too happy to be the conduit of it, after all rock'n'roll saved my soul."
Posted by djinn at 5:47 PM

Email ThisBlogThis!Share to TwitterShare to FacebookShare to Pinterest
Labels: Rock stars I have crushes on

Hey, I was there! Some of those people were from the city, and by that I mean NYC. Thurston showed up and chatted jokingly with the front row while you were in the bathroom filling the Pepsi with bourbon (thanks for that BTW). You are correct: this show was F'ing Great. I'll never look at a guitar quite the same way again. Kisses.