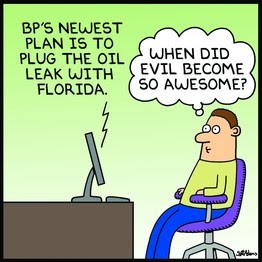 Forgive the bad word, but sometimes a nice anglo-saxon expletive is what is needed.  OK, the word didn't show up until the 14th century in English, but it definitely descends from the old German, where it meant approximately the same thing.

Point 1:  BP payed off the Obama administration and other politicians "spending just shy of $20 million on federal lobbying over the last two years". Very clever.

Point 2:  The Obama administration is stuffed full with former BP executives.  (We must assume they must jostle for room with the Goldman-Sachs boys.)

The regulatory agency for the deep-sea drilling vampires (don't believe the vampire hype, they're really in the hire of those with the deepest pockets; how else do they pay for the dry-cleaning bills on their lace shirts?) is MMS, the Land and Minerals Management agency.  Obama hired someone off an 8 year stint as an executive at BP (Sylvia Baco) as a deputy administrator.

What did this get BP?

Federal documents show that the Department of the Interior's Minerals Management Service (MMS) gave BP a "categorical exclusion" on April 6, 2009 to commence drilling with Deepwater Horizon even though it had not produced the impact study required by a law known as the National Environmental Policy Act (NEPA). The report would have included probable ecological consequences in the event of a spill.

And so the story goes. We, and the pelicans, and the bayou, and the whole gulf of Mexico were sold out for a pittance.

Of course, the administration and BP have been lying to us for what, 6 weeks?  about the size of the spill.  First BP said 1000 barrels a day, then they upped it to 5000 barrels.  Now, that they're capturing their all that they can, upwards of 15,000 barrels, with lots more left, they (the Obama administration --Stephen Chu,  I trusted you, what was I thinking?-- are admitting, finally that just perhaps the spill was  an order of magnitude (50,000 barrels) or more, all the way up to 100,000 barrels a day.  Here's a nice non-hysterical chart of how  much oil has probably leaked into the gulf.  It's pretty scary,

BP should spend all of its resources cleaning  this up,  every last penny.  Seeinng as how they made $17 Billion (notice the B) last year, they should be able to do so,

Update--the NYT has an article on newest estimates of the flow rates prior to the riser being cut.   Lede? Estimates double, and this is before the riser cut which has been estimated to add another 20% to the flow.
Posted by djinn at 12:25 AM

I do not disagree with the outline of this post - this situation is frustrating and dangerous and seems to be beyond the control of those in charge. These are the questions I keep wanting asked and answered at each step because when any situation is larger than most of us can address or handle in one attempt it is necessary to recall who is truly responsible and who should be held accountable and who should/can rectify it-
- What is the fact finding process? What is the plan of action set in order to address these issues - define it for me please.
- Who is INDIVIDUAL responsible for not only the fact checking prior to responding to the demand for information regarding the whole situation but the individual who was originally in charge, the individual who reported the issue, the individual who 1st accessed the issue, the individual who has the original records and reports.
- Is there a true and accurate method in which to clean up the situation and if there is WHO (individual) is or isn't implementing it and why

And lastly I why did this post begin with the definition of an Anglo Saxon Word that we are all familiar with and many of use on a daily basis ?

I agree Simone, and should have emphasized how we have been kept in the dark by the administration and BP, as you so aptly pointed out.

As to the non- or even anti-clever use of asterisks in the title, I don't know; I have mormon family who may occassionally read this blog, and it seems both inherently amusing and marginally less offensive to them to use the occassional asterisk.