Bachmann: Too Ignorant To Represent Anyone 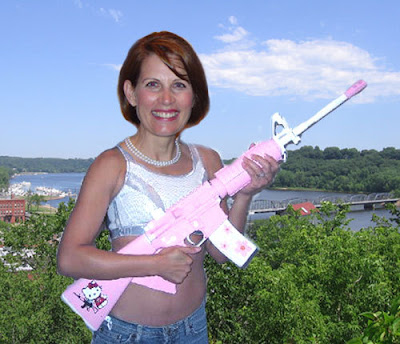 Bachmann went on Beck's radio show and made preposterous claims about the impact of other nations developing a hybrid reserve currency. She clearly does not not what she is talking about, but since most people don't either, Beck's audience probably feels threatened by this new menace. Bachmann wants Congress to draft legislation forbidding this new reserve currency, but does not seem to understand that other countries can use whatever they want to for their own financial reserves; Congress does not write law for the whole world.

Is there a responsible Republican anywhere that will put Beck's audience's minds at ease about this non-threat?

Below, read this transcript (from Matt Yglesias) of part of her interview on Beck's show:

BACHMANN: Let me tell you, there’s something that’s happening this week in Congress that could be the eventual unraveling for our freedom, and it’s this. I had asked the Treasury Secretary and Ben Bernanke, the Federal Reserve Chair, if they would categorically denounce–

BECK: Most people don’t understand what that means.


BACHMANN: What that means is that all of the countries of the world would have a single currency. We would give up the dollar as our currency and we would just go with a One World currency. And now for the first time, we’re seeing major countries like China, India, Russia, countries like that, calling for a one world currency and they want this discussion to occur at the G20. So I asked both the Treasury Secretary and the Federal Reserve chair if they would categorically denounce this. The reason why is because if we give up the dollar as our standard, and co-mingle the value of the dollar with the value of coinage in Zimbabwe, that dilutes our money supply. We lose country over our economy. And economic liberty is inextricably entwined with political liberty. Once you lose your economic freedom, you lose your political freedom. And then we are no more, as an exceptional nation, as we always have been. So this is imperative.

Why Bachmann feels the need to allude to American exceptionalism is anyone's guess. I suspect it is because it has a lot of syllables, The Alaskan Governor talked about it a lot, and people don't know what it means, but it sounds patriotic.

It's embarrassing to have such an idiot in Congress although I expect there are many.
Posted by kerfuffler at 7:32 AM