Reading the meticulous directions for the brownie recipe below (following post) triggered a flashback to my college years. For a time I lived at Xanadu Co-op, a coed house with 53 residents plus a handful of boarders. Talk about a learning experience! 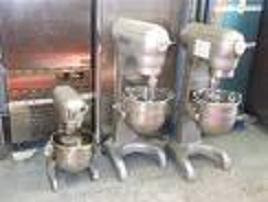 We prepared all our own meals, so this meant that a bunch of young and inexperienced cooks (some MORE so than others) were all of a sudden preparing meals for about sixty people. At least we had a Hobart mixer!

Hobart mixers come in a range of sizes and are of the same general design as Kitchen-aid mixers----in fact, Kitchen-aids are just the domestic version of those giant, industrial mixing machines. The one at Xanadu stood about four feet tall and featured a mixing bowl well over two feet deep.

I remember walking into the kitchen one day and seeing N---- hovering over the bowl, her arm reaching all the way down into the bottom; the rim was practically at her armpit. I approached, wondering what had fallen into the machine.

When I got close, I saw that after pushing her sleeve way up, she had apparently thrust her arm deep into a batch of brownie batter. "N-----, what are you doing?"
She straightened up, momentarily pulling her arm from the batter. Thick brown clumps clung all along her forearm. She pointed agitatedly at the Joy of Cooking on the counter. "It said when you add the flour, 'stir by hand'!"

At dinner, I declined to tell my fellow diners of the culinary technique our cook had employed that evening. As for the brownies? They disappeared quickly.
Posted by kerfuffler at 2:51 PM

Stir by hand. She stirred by hand. You should have renamed her "Amelia Bedelia."

Actually, I think on of the secrets to making good brownies is stirring the flour mixture ever-so-gently into the other stuff. I always stir by "hand," though I am enough of a wuss to define "hand" to include spatula or large spoon.

"one of the secrets.' Darn typos. Why do I worry about the subjunctive when i can't spell a simple "three-letter word?

In my defense, my keyboard is iffy, to say the least. The shift key only works randomly and various other letters only type when they feel like it. And I'm a touch typist. Good excuse? Or should I do better?